How to Change a Law: The intelligent consumer's 7-step guide. Improve your community, influence your country, impact the world. (Paperback) 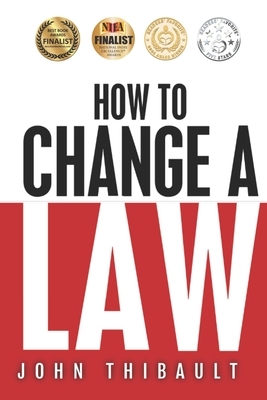 How to Change a Law: The intelligent consumer's 7-step guide. Improve your community, influence your country, impact the world. (Paperback)

This book is a do-it-yourself manual for voters, small business owners, lobbyists, and policy advocates who want to take political action, influence leaders and change laws.

This book is for you if you ever

Wanted to change a law.Thought a law was unfair or unjust.Felt confused by bureaucracy.

Thibault provides a better understanding of policy change and political persuasion (also known as lobbying). Once you understand the power of lobbying, you will be able to improve your community, influence leaders, and impact the world.

How To Change A Law offers insight, actionable tools, and strategies that will lead you to becoming an active Citizen Legislator who realizes that their participation in public policy matters.

The 7-step process for successfully making a significant change and taking action in just 60 minutes.Common mistakes to avoid.Successfully getting past internal and external roadblocks.Real life policy success stories where someone saw a problem and wanted to implement a solution to make a change.Demystify politics.How to vote on issues, not for candidates.How to use the Political Persuasion Platform(TM) and the iLobby solution to change laws through crowd funded lobbying.

We are at a turning point in our politics; everyone needs to get involved, come together around issues, build coalitions, fund their initiatives, and intelligently pursue their agenda.

This book is your roadmap.

When John Thibault was still in college at Ryerson University, he knew he had something to say, that he had to do something to make a difference in the world. But that "something" hadn't yet taken shape. After receiving his MFA degree from UCLA, he was offered a full-time position in Government Relations at Universal Studios, MCA. It was then that he got to interface with Congressmen and Senators and their staff, administration, heads of state, civic leaders, and state legislators. He received a first-hand lesson in political persuasion at the highest level, learning about issues, policy, Federal Election Commission reporting, Fair Political Practices Commission compliance, working with lobbyists, fundraisers, electioneering, security details, and protocol. He recognized the experience was invaluable but was still searching for his "one big thing" that he was meant to do. After leaving Universal Studios, MCA, John's fascination with Internet technology led him to a young eBay, where he served as the first Vice President of Business Development & Marketing. From there he served as the first Vice President of Marketing at Financial Engines. It was during this time, by 1996, that his mission became crystal clear, and his combined fascination with Internet technology, influence and politics resulted in How To Change A Law and the founding of iLobby.co. "Americans needed to understand what Washington insiders have taken for granted. Voters needed to recognize that laws affect every aspect of our lives, that public policy matters!" Today, John is the CEO of iLobby. Several magazines have features John's work, including Association News, Manufacturing Today, CEO for High Growth Ventures and Millennial Magazine. During his free time, John enjoys skiing and most recently, fly boarding. He lives with his wife and three children in Northern California.