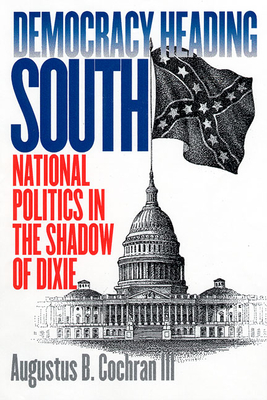 By Augustus B. Cochran III


This title is likely unavailable. Email or call for price and availability.
In a time when many citizens feel that American politics has changed in disturbing ways, Gus Cochran believes that democracy itself may be heading South. And that, he argues, spells trouble for us all. In this provocative book, Cochran links regional to national politics to show how our political institutions have come to resemble those of the old Solid South. The regional politics of that earlier era, he reminds us, offered little real political choice, was dominated by one-party politics, answered to well-heeled special interests, stoutly resisted federal power, ignored the region's festering racism, and promoted demagoguery and personality over substance and true accountability. For Cochran, the sense of deja vu is overwhelming--and alarming. Deftly balancing history and political critique, Cochran describes the origins and traits of the Solidly Democratic Southern political system from the turn of the century through the 1960s and its transformation in the wake of that turbulent decade. The South, he shows, eventually modernized and became more integrated, even as the New Deal unraveled and the North became more racially polarized. As the region's shifting fortunes evolved, national politics witnessed a backlash to the civil rights movement (the original engine of political change) that turned the New South into a presidential power broker and spurred a Republican party renaissance nationwide. Cochran maintains that national politics today offers an array of disturbing parallels with old-style Southern politics. He notes that even the controversial Clinton impeachment-in which many of the major actors were Southern-evokes the down-and-dirty politics of old Dixie. Even so, he doesn't push the analogies between south and nation too far. He recognizes significant differences as well as parallels but argues that recent trends toward convergence deserve a close and critical look. In the end, Cochran's warning shot raises critical questions about the future direction of American democracy, while suggesting potential correctives through campaign finance reform, better inducements to voter participation, and more effective means for informing the electorate. Eloquently argued, his book is also a call to action--before American democracy heads south for good.