The Coalition Crumbles, Napoleon Returns: The 1799 Campaign in Italy and Switzerland, Volume 2 (Paperback) 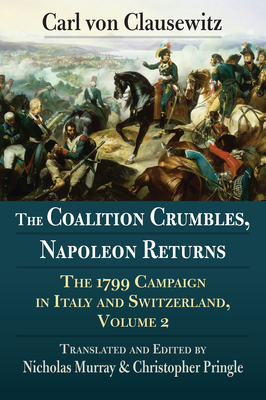 The Coalition Crumbles, Napoleon Returns: The 1799 Campaign in Italy and Switzerland, Volume 2 (Paperback)


This title is likely unavailable. Email or call for price and availability.
Carl von Clausewitz (1780-1831) is best known for his masterpiece of military theory On War, yet that work formed only the first three of his ten-volume published writings. The others, historical analyses of the wars that roiled Europe from 1789 through 1815, informed and shaped Clausewitz's military thought, so they offer invaluable insight into his dialectical, often difficult theoretical masterwork. Among these historical works, one of the most important is Der Feldzug von 1799 in Italien und der Schweiz, which covers an important phase of the French Revolutionary Wars. The Coalition Crumbles, Napoleon Returns focuses mainly on the campaigns in Switzerland, where the cracks that finally fractured the alliance between Russia and Austria and led to the defeat of the Second Coalition first opened. Moving from strategy to battle scene to analysis, this first English translation of volume 6 of Clausewitz's collected works nimbly conveys the character of Clausewitz's writing in all its registers: the brisk, often powerful description of events as they unfolded and the critical reflections on strategic theory and its implications. The Coalition Crumbles, Napoleon Returns features Suvorov's astonishing march through the St. Gotthard Pass and major actions such as the Second Battle of Zurich and the Battle of Mannheim. The nature of the campaign highlighted the contrast between the opposing armies' different strengths and weaknesses and the problems of fighting as part of a coalition. This book will expand readers' experience and understanding of not only this critical moment in European history but also the thought and writings of the modern master of military philosophy.