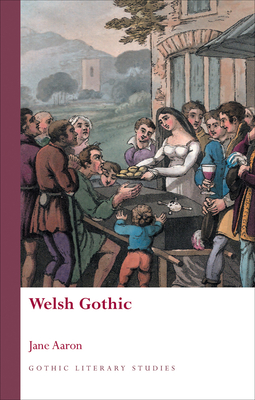 Welsh Gothic introduces readers to the array of Welsh Gothic literature published from 1780 to the present day. Calling on postcolonial and psychoanalytic theory, Jane Aaron argues that many of the fears encoded in Welsh Gothic writing are specific to the history of the Welsh and reveal much about the varying ways in which the Welsh people have been perceived and have viewed themselves throughout history. The first part of the book explores Welsh Gothic writing from its beginnings in the last decades of the eighteenth century to 1997. The second part focuses on the figures specific to the Welsh Gothic genre who have entered literature from folklore and local superstition, such as the sin-eater, hellhounds, dark druids, and Welsh witches.
Jane Aaron is professor of literature at the University of Glamorgan, UK.
"Groundbreaking. . . . A necessity for any thorough study of the Gothic literature of the British Isles."
— CHOICE

“Jane Aaron’s magisterial monograph brings to light just how thoroughly Wales was gothicized, from Mary Robinson to Arthur Machen, Caradoc Evans to Gwyn Thomas, and through to Ruth Bidgood. Arguing that the eighteenth- and nineteenth-century medievalism (which mythologized Celtic origins of Welsh nationalism) also haunted Welsh writing at least until 1997, she skillfully exorcises specters of decline and dissolution that are definitely Welsh—the scapegoat, the sin-eater, whole families cursed by disease and capitalist exploitation, and individuals doomed to guilt and self-loathing by inward-looking communities. This comprehensive and bold work of scholarship will change the way we think about both the history of gothic and Welsh writing in English.”
— Caroline Franklin, Swansea University

“This is an exhilarating study that confirms Jane Aaron’s reputation for groundbreaking publications. She demonstrates how the gothic imagination materializes at all the key points in the historical development of modern Wales, repeatedly furnishing a threatened culture with a dark grammar for its deepest anxieties. And, in the process, she succeeds in finding a significant place for Wales for the first time in the haunted international landscape of gothic writing.”
— M. Wynn Thomas, Swansea University