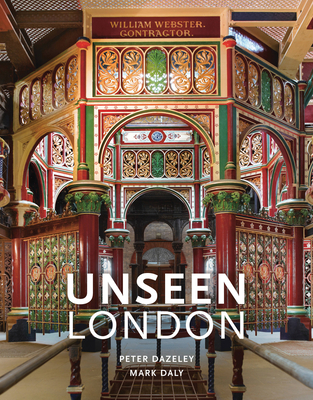 By Peter Dazeley (By (photographer)), Mark Daly (Text by)

From Tower Bridge to Battersea Power Station, Big Ben to the Old Bailey – embark on a thrilling tour of the hidden interiors of some of London's most iconic buildings.

Unseen London takes you deep into the boiler room of the city's infrastructure, into the changing rooms of our greatest temples of sport, into the heart of the Establishment, and behind the scenes at the most opulent buildings in the Square Mile. Photographs of these extraordinary buildings are accompanied by thoughtful text, which tells the story of how each of these places was created, how they are used, and what they reveal about the currents of power flowing through the city.

Revised and updated to include the royal palaces of Hampton Court; the Tower of London; the Inigo Jones Banqueting Hall at Palace of Whitehall; and the Royal Courts of Justice, Supreme Court and Bow Street Magistrates Court.

See a glimpse of London behind closed doors with this unique guide to the city's buildings.

PETER DAZELEY FRPS, known as Dazeley, is a celebrated London photographer renowned for fine art and advertising  photography. He was born in West Kensington and studied photography at Holland Park School, now known as the Socialist Eton. His work has won many awards from organisations across the world, including the Association of Photographers and the Royal Photographic Society in the UK, EPICA in France, Applied Arts Magazine in Canada, and Graphis Inc. in the USA. Dazeley is a member of the Association of Photographers and a fellow of the Royal Photographic Society. Peter Dazely is the photographer of Unseen London, London Uncovered, London Theatres (all Frances Lincoln).

MARK DALY is a writer and publisher with a longstanding interest in secret and little-known aspects of London. He has also devised a number of London walking tours, focussing on little-known or unusual aspects of the city. His previous book with Dazely is the acclaimed Unseen London.