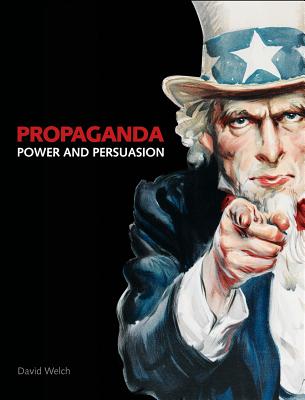 Propaganda is a double-edged sword. It can help a cause or destroy a person's career, depending on the intentions of the user. The pens of Voltaire and Rousseau inflamed opposition to Bourbon rule in France, just as Thomas Paine's "Common Sense "roused and influenced opinion in the American Revolution. Rosie the Riveter, the star of a US government campaign aimed at recruiting female workers for the munitions industry, became one of the most recognized images of working women during World War II. And with the development of modern media, global warfare, and the rise of extremist political parties, propaganda is more widespread now than ever.From safe sex to dictatorships, from the iconic to the everyday, "Propaganda: Power and Persuasion," which accompanies a major new exhibition at the British Library, explores how different states have used propaganda during the twentieth and twenty-first centuries. Different techniques are highlighted such as the appeal to authority and common man approaches as are the various forms in which propaganda appear, including posters, books, films, stamps, leaflets, matchboxes, cartoons, music, and newspapers. The book concludes with a look at how the explosion in social media is influencing the way the state attempts to persuade and control its citizens.Exploring a surprising range of propaganda from around the world, readers will be challenged to look critically at the messages, methods, and media of propaganda through time and across cultures.

David Welch is professor of modern history and director of the Centre for the Study of War, Propaganda, and Society at the University of Kent, where he specializes in twentieth-century political propaganda. He is the author of numerous books on propaganda, including "Justifying War: Propaganda, Politics and the Modern Age "and "The Third Reich: Politics and Propaganda."