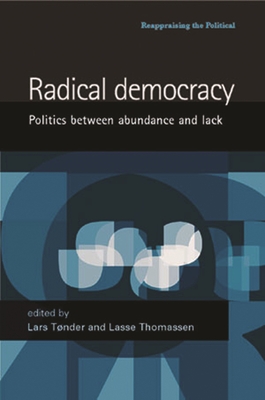 
Available in Warehouse. Wait for Email Confirmation for ETA
This book cannot be returned, cancelled, or exchanged. Please call for availability and pricing
Available at last in paperback, Radical democracy brings together original contributions from established and emerging scholars. The contributors discuss the theoretical and practical implications of the two dominant approaches to radical democracy: theories of abundance inspired by Gilles Deleuze and theories of lack inspired by Jacques Lacan. They examine the idea of radical democracy from a wide variety of perspectives: identity/difference, the public sphere, social movements, nature, popular culture, right wing populism and political economy. In addition, the volume relates the work of contemporary thinkers such as Deleuze, Lacan, Derrida and Foucault to classical thinkers such as Spinoza, Hegel, Marx and Nietzsche. William Connolly and Ernesto Laclau conclude the volume with two afterwords on the future of radical democracy. With its original contributions, Radical democracy is essential reading for advanced students and scholars who have an interest in the political and theoretical problems of radical democracy.