Tell Me When You Feel Something (Paperback) 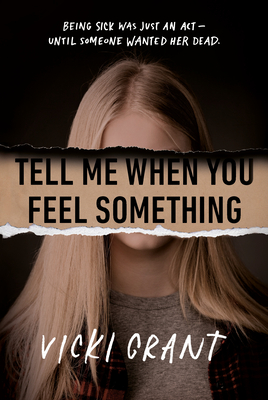 Tell Me When You Feel Something (Paperback)


Available for Pre-Order Now
The perfect after-school job turns deadly for teens working as "simulated patients" at the local med school. Everyone has something to hide and no one is safe in this contemporary YA thriller that exposes the dark reality of #MeToo in the world of medicine, for fans of Karen McManus and Holly Jackson.

It seemed like a cool part-time program — being a "simulated" patient for med school students to practice on. But now vivacious, charismatic Viv lies in a very real coma. Cellphone footage just leads to more questions. What really happened? Other kids suspect it was not an intentional overdose — but each has a reason why they can't tell the truth.
Through intertwining and conflicting narratives, a twisted story unfolds of trust betrayed as we sift through the seemingly innocent events leading up to the tragic night. Perhaps simulated patients aren't the only people pretending to be something they're not . . .
Vicki Grant is the author of seventeen books including 36 Questions That Changed My Mind About You (which has sold to seventeen countries and has been optioned for film), The Puppet Wrangler, Quid Pro Quo, Dead-End Job and Not Suitable for Family Viewing. Her books have consistently garnered her recognition from the American Library Association, the Canadian Library Association and the Canadian Children's Book Centre. Quid Pro Quo was shortlisted for an Edgar Award from the Mystery Writers of America and was included as a "best book" by The New York Public Library, Bank Street College, and The Canadian Children's Book Centre, and won the Arthur Ellis Award for Best Juvenile Crime fiction in Canada.
One of CCBC’s Best Books for Kids and Teens, Fall 2021 — Starred Pick

"An important representation of the pressure that teenagers can feel and the damaging coping habits that they can use to maintain a semblance of normalcy." —CM: Canadian Review of Materials

“A thriller about a 17-year-old whose life falls through the cracks.” —Kirkus Reviews