The Scientist and the Psychic: A Son's Exploration of His Mother's Gift (Paperback) 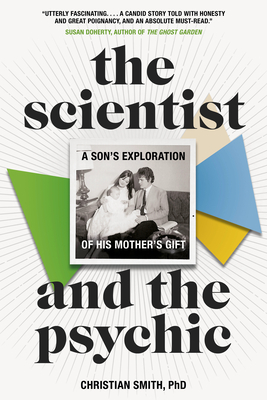 The Scientist and the Psychic: A Son's Exploration of His Mother's Gift (Paperback)


Available in Warehouse. Wait for Email Confirmation for ETA
Weaving together the story of his fractured relationship to his mother with research into her paranormal abilities, Dr. Christian Smith has created, in The Scientist and the Psychic, a captivating, one-of-a-kind memoir of belief, skepticism and familial love.

Christian Smith realized his mother was different in the autumn of 1977 when he was eight years old. Before then, he'd witnessed séances at home and the kids at school sometimes teased him about his mom being a witch--so he sensed that his life wasn't typical. But it wasn't until he was backstage at a renowned concert venue in Toronto, watching from behind a curtain as Geraldine commanded an audience of 2,000 with her extrasensory readings, that he understood she was special. As Geraldine's only child, he would assume the role of the quiet observer while she guided a live CBC broadcast of a séance; made startling and consistently accurate predictions; and eventually moved to LA to work with the parents of murder victims--and with convicted murderer Jeffrey R. MacDonald. Over time, the high profile and emotionally depleting work affected Geraldine's health and relationships. Addiction took over her life, and her son pulled away.

Fast forward to the present day: Christian is a molecular biologist and Geraldine is retired and in poor health. They are closer than they've ever been, and now he gives us the story of her undeniable perceptual abilities and pioneering work as a psychic--and endeavours to make scientific sense of it.
DR. CHRISTIAN SMITH holds a doctorate in the molecular and cellular biology of cancer, has twenty-three years of experience as a research scientist, and recently completed an MFA in Creative Non-fiction from the University of King's College. Since 2006, he has been the Manager of Research Operations of a world-renowned Brain Tumour Research Centre in Toronto. The Scientist and the Psychic is his first book.
“In this utterly fascinating book, Christian Smith’s science background is juxtaposed with his mother’s paranormal gifts as a psychic medium, pitting research against experiences that cannot be replicated. Smith’s search for absolute proof of both the afterlife and the survival of consciousness after death will push even the most skeptical minds towards acceptance. The Scientist and the Psychic is also a love letter from a son to his mother—a ‘behind the lens’ exploration of mediumship, channeling, psychometry, and telepathy, and the heart-breaking toll these extraordinary gifts exacted on Geraldine Stringer’s closest family members, and on herself. A candid story told with honesty and great poignancy, and an absolute must-read.” —Susan Doherty, author of The Ghost Garden

“The Scientist and the Psychic is well-written and thought-provoking—an intriguing twist on the tale of a child of whose celebrated parent attends more to her public than to them. Christian Smith offers compelling ideas about his mother’s psychic mind and celebrates, in the end, the gifts of connection and forgiveness.” —Patricia Pearson, author of Opening Heaven’s Door and Wish You Were Here