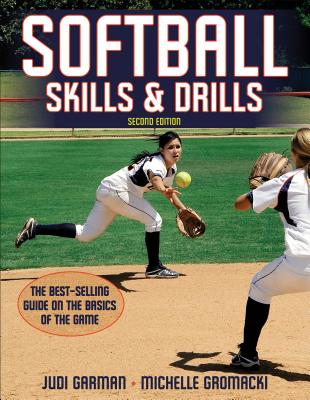 Looking for the ultimate book to help you learn and master softball’s essential skills? Look no further than the guide that has helped develop the game’s top players and most successful teams. This new edition of Softball Skills & Drills is completely updated with more skills, more drills and strategies, and more of the stellar instruction that have made it the top-selling title on the sport.

Judi Garman, one of the winningest coaches in NCAA history, teams with Cal State Fullerton’s Michelle Gromacki to share their secrets to developing and mastering every aspect of the game.

And with over 230 of the game’s best drills, coverage of team offense and defense, pitch selection, pitch recognition, and in-game strategies, Softball Skills and Drills is simply the most comprehensive and practical guide on the sport.

Whether striving to become a complete player or preparing your team for another championship run, Softball Skills &Drills is the one book you cannot be without.

Judi Garman is one of the most successful coaches in college softball history, having retired as the nation’s winningest coach in 2000 after coaching for 28 seasons and earning a career record of 1124-416-4(.727) and 7 national championships as a player and coach.

Garman was a Canadian all-star outfielder and member of two Canadian national championship teams. Garman began her coaching career at Golden West College in Huntington Beach, California, and won four consecutive national junior college championships from 1975 to 1978. She then established the softball program at California State University at Fullerton in 1980. She built it into one of the most successful softball programs in the United States, winning the Women’s College World Series Championship in 1986 following two runner-up and three third-place finishes. From 2000 to 2002, Garman coached the Italian National Team to a European Championship and a fifth-place finish at the 2002 ISF World Championship.

Garman served as president of the National Fastpitch Coaches Association (NFCA) from 1990 to 1991 and was inducted into their Hall of Fame in 1993. She resides in Redstone (Aspen), Colorado, and Palm Desert, California.

Michelle Gromacki is the head coach of Cal State Fullerton softball, one of the most prestigious programs in the nation. Under Gromacki’s guidance, the Titans have staked their claim to five Big West Conference championships, including four consecutive conference titles from 2000 to 2003. In 2006,Gromacki was named Regional Coach of the year.

Michelle Gromacki played for Cal State Fullerton and was the catcher on the 1996 national championship team. She continued her playing career with the Redding Rebels and took home three national championship titles in women’s major fastpitch. She was also on the U.S. national team for 10 years. She competed in many international tournaments and won gold medals in all of them.

Gromacki is one of the NFCA college coaches instructors and also conducts speaking engagements all over the world. She resides in Huntington Beach, California.

"Softball Skills & Drills is a must-have for every player. Judi Garman and Michelle Gromacki offer hundreds of drills and skills needed for success in fastpitch."

"It’s not often that you get the perspective of a tremendous player and a Hall of Fame coach in one book. Judi and Michelle offer insight and teaching cues that will benefit players and coaches of all ages!"

"Judi Garman and Michelle Gromacki do a great job of describing the correct skills and drills for helping players improve. Softball Skills and Drills is an outstanding reference for all aspects of the game and a must for every softball coach."