Revealing Revelation: How God's Plans for the Future Can Change Your Life Now (Paperback) 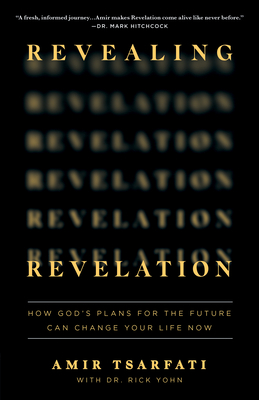 Revealing Revelation: How God's Plans for the Future Can Change Your Life Now (Paperback)

Tour the Final Book of the Bible Revelation was written because God wants us to know what the future holds. For Christians, the prophetic truths within provide wisdom, reassurance, and discernment--while for unbelievers, Revelation is a plea to receive God's grace while there is still time. Bestselling author Amir Tsarfati examines what Revelation makes known about the end times and beyond. Guided by accessible teaching that lets Scripture speak for itself, you'll take a closer look at the
Revealing Revelation provides an eye-opening look at what lies ahead for every person in the end times--either in heaven or on earth. Are you prepared for what is to come?
Amir Tsarfati is a native Israeli and former Major in the Israeli Defense Forces. He is the founder and President of Behold Israel--a nonprofit ministry providing access to news and information about Israel from a biblical and prophetic standpoint. Amir is married and has three sons, one daughter, and a daughter-in-law, and resides in northern Israel. Dr. Rick Yohn has been a pastor for over forty years. He has studied and taught prophecy for over sixty years. He is the former Dean of Biblical and Theological Studies in the Adult and Graduate Department for Colorado Christian University. He continues to teach both in the bachelor's and master's degree programs. Dr. Yohn has a passion to take the complicated and make it simple. He is the author of many books and Bible Studies, a number of which have been translated into other languages.