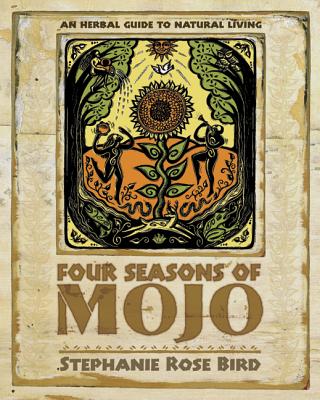 The changing of the seasons can feel magical-greens changing to browns and golds, snow melting to show fresh buds. We all recognize these tell-tale signs, but few are aware of the powerful impact each season has on our spiritual lives. Four Seasons of Mojo infuses ancient techniques, rituals, and methods from around the world to use each season's inherent energies to supplement body, mind, and soul.

Stephanie Rose Bird is a hereditary intuitive, contemporary rootworker, solitary green witch and visionary. She has been involved with mysticism, symbology, spiritualism and the occult for thirty years. Bird is inspired by her ancestors, in particular her grandmothers, one of which was a psychic and the other a spiritualist minister and herbal healer. Her uncle, a Santeria priest, Babalawo of Shango, taught her the Ifa traditions of the Yoruba people. Bird studies healing, magical and divination traditions of indigenous people around the world with a focus on Africa. Her passions include keeping the ancient traditions alive and updating them so that they evolve with us, suiting our current environment and lifestyles. She is a member of the American Folklore Soceity, the Herb Research Foundation and the Handcrafted Soap & Cosmetic Guild. Bird holds a BFA cum laude from Temple University, Tyler School of Art, and an MFA from University of California at San Diego, and has received multiple academic awards. Bird was an assistant professor at the School of the Art Institute of the Art Institute of Chicago from 1987-2002. Bird offers healing workshops, rituals, retreats, and classes across the country. Bird is an active arts educator, teaching undergraduate art appreciation and art history in Chicago, giving lectures, conducting goddess rituals, and writing for numerous publications. Visit Stephanie's webpage at http: //www.stephanierosebird.com/. Website: http: //www.stephanierosebird.com/ Blog: http: //stephanierosebirdstudio.blogspot.com/ Facebook https: //www.facebook.com/stephanierosebirdauthor.