The Golden Dawn: The Original Account of the Teachings, Rites, and Ceremonies of the Hermetic Order (Hardcover) 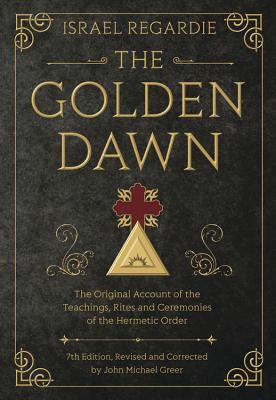 The Golden Dawn: The Original Account of the Teachings, Rites, and Ceremonies of the Hermetic Order (Hardcover)

First published in 1937, Israel Regardie's The Golden Dawn has become the most influential modern handbook of magical theory and practice. In this new, definitive edition, noted scholar John Michael Greer has taken this essential resource back to its original, authentic form. With added illustrations, a twenty-page color insert, additional original material, and refreshed design and typography, this powerful work returns to its true stature as a modern masterpiece.

An essential textbook for students of the occult, The Golden Dawn includes occult symbolism and Qabalistic philosophy, training methods for developing magical and clairvoyant powers, rituals that summon and banish spiritual potencies, secrets of making and consecrating magical tools, and much more.

Francis I. Regardie, born in London, England, November 17, 1907; died in Sedona, Arizona, March 10, 1985. Came to the United States in August 1921, educated in Washington D.C. and studied art in school in Washington and Philadelphia. Returned to Europe in 1928 at the invitation of Aleister Crowley to work as his secretary and study with him. Returned to London as secretary to Thomas Burke 1932-34, and during that time wrote A Garden of Pomegranates and The Tree of Life. In 1934 he was invited to join the Order of the Golden Dawn, Stella Matutina Temple, during which time he wrote The Middle Pillar and The Art of True Healing, and did the basic work for The Philosopher's Stone. Returning to the United States in 1937 he entered Chiropractic College in New York, Graduating in 1941, and published The Golden Dawn. Served in the U.S. Army 1942-1945, and then moved to Los Angeles where he opened a chiropractic practice and taught psychiatry. Upon retirement in 1981, he moved to Sedona. During his lifetime, he studied psychoanalysis with Dr. E. Clegg and Dr. J. L. Bendit, and later studied psychotherapy under Dr. Nandor Fodor. His training encompassed Freudian, Jungian and Reichian methods. One of the most respected writers and teachers in the occult field today, John Michael Greer has written more than fifty books on esoteric traditions, nature spirituality, and the future of industrial society. An initiate in Druidic, Hermetic, and Masonic lineages, he served for twelve years as Grand Archdruid of the Ancient Order of Druids in America (AODA). He lives in Rhode Island, USA with his wife Sara. He can be found online at www.EcoSophia.net.