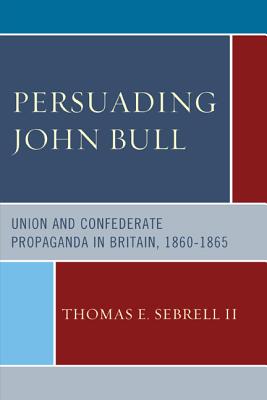 This is the first scholarly analysis of The London American, the pro-Union propaganda journal published in London during the American Civil War, and the motives and troubles of its proprietor, John Adams Knight, a Northern American based in the British capital. The newspaper's successes and failures in attempts to manipulate British public opinion during the war are compared with that of The Index, its rival Confederate propaganda weekly headquartered two doors down London's Fleet Street. Persuading John Bull provides scholars and general readers alike a far greater understanding of the largely unknown Northern newspaper's motivations and campaigns during the war, as well as an in-depth analysis of The Index which builds greatly on present historiographical discussions of the Southern journal. It also offers new insights into Britain's roles in the conflict, Anglo-American relations, and mid-Victorian British political and social history. The book is not restricted to discussing the two propaganda machines as its focus-they are used to approach a greater analysis of British public opinion during the American Civil War-both journals were strongly associated with numerous key figures, societies (British and American), and events occurring on both sides of the Atlantic pertaining to the conflict. Although propaganda is only one source from which to tap, the effectiveness of the two lobbyist journals either directly or indirectly impacted other factors influencing Britain's ultimate decision to remain neutral. This book reveals a fresh new cast of Union supporters in London, in addition to more Confederate sympathizers throughout Britain not previously discussed by scholars. The roles of these new figures, how and why they endorsed the Northern or Southern war effort, is analyzed in detail throughout the chapters, adding greatly to existing historiography.

Thomas E. Sebrell II is a visiting lecturer of history at the University of Westminster.