Will You Miss Me When I'm Gone?: The Carter Family & Their Legacy in American Music (Paperback) 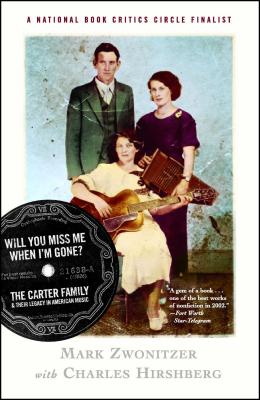 Will You Miss Me When I'm Gone?: The Carter Family & Their Legacy in American Music (Paperback)


Available in Warehouse. Wait for Email Confirmation for ETA
The first major biography of the Carter Family, the musical pioneers who almost single-handedly created the sounds and traditions that grew into modern folk, country, and bluegrass music.

Meticulously researched and lovingly written, it is a look at a world and a culture that, rather than passing, has continued to exist in the music that is the legacy of the Carters—songs that have shaped and influenced generations of artists who have followed them.

Brilliant in insight and execution, Will You Miss Me When I'm Gone? is also an in-depth study of A.P., Sara, and Maybelle Carter, and their bittersweet story of love and fulfillment, sadness and loss. The result is more than just a biography of a family; it is also a journey into another time, almost another world, and theirs is a story that resonates today and lives on in the timeless music they created.
Mark Zwonitzer is a writer and director whose work appears nationally on public television. He is currently finishing up work on a documentary about the creation of the transcontinental railroad and hopes to begin working on a documentary about the Carter Family soon. He lives in Connecticut.
Fort Worth Star-Telegram A gem of a book...one of the best works of nonfiction in 2002.

The Atlanta Journal-Constitution Once in a blue moon you read a riveting biography built of new information more humanizing than scandalizing, rich with detail, not dirt. That's the case with this fresh story of...the original Carter Family. Anyone who cares about country music will love this account of its humble beginnings....It is the utter guilelessness of the subjects, plus the honest approach of the biographer, that makes this a terrific tale.

The Christian Science Monitor In the heart of the Depression, radio listeners across North America thought of the Carters as family....But off the air, these pioneers of modern folk, country, and bluegrass music were intensely private people who left behind almost none of the paper clues on which biographies can rise. How much more of a triumph, then, is Will You Miss Me When I'm Gone?, the first major biography of the Carter Family. Drawing on the recollections of relatives, neighbors, listeners, and scholars, Mark Zwonitzer, with Charles Hirshberg, achieves an elegant story of a cast of characters more complex than their fans would believe, or their melodies suggest.