A Simple Guide to U.S. Immigration and Citizenship (Paperback) 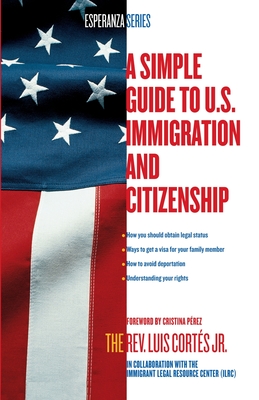 A Simple Guide to U.S. Immigration and Citizenship (Paperback)

A Simple Guide to U.S. Immigration and Citizenship

Immigration in America is a complex issue. And as with any worthwhile goal, securing your citizenship requires a lot of work. You'll face many obstacles, and potential pitfalls, but being educated about the process is the first step toward getting what you want.

The Reverend Luis Cortés Jr. has developed this simple guide to lead you through the complicated web of bureaucracy and to answer many of your questions. For example: What happens if you're in the United States without papers? What could prevent you from getting a green card? What are the different types of visas? You'll also find "Warnings" to protect you from fraudulent offers and the risk of deportation. Most important, Cortés informs you of your rights, because whether you're a legal immigrant or not, you do have rights.
The Reverend Luis Cortés Jr. is the president and CEO of Esperanza USA, the largest Hispanic faith-based community-development corporation in the country. In January 2005, he was featured as one of Time magazine's "25 Most Influential Evangelicals."

Cristina Perez is a successful lawyer, three-time Emmy Award winning television personality, radio host, entrepreneur/business owner, national author and columnist, and devoted mother and wife. The daughter of Colombian immigrants, Cristina was born in New York. Cristina was the host of the Spanish language television program La Corte de Familia (Family Court) which aired nationally and internationally in fifteen countries on the Telemundo Network/NBC (2000-2005). In 2006, Cristina made her English-language television debut on Twentieth Television’s first-run syndicated Cristina’s Court. She has been named Woman of the Year in California for her community activities and was named one of America’s Top 10 Latina Advocates. Visit her online at CristinaPerez.tv.