Justinian: Empire and Society in the Sixth Century (Debates and Documents in Ancient History) (Paperback) 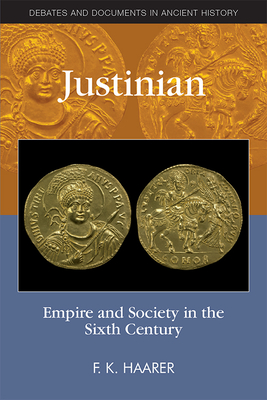 Justinian: Empire and Society in the Sixth Century (Debates and Documents in Ancient History) (Paperback)

The Emperor Justinian had a long and influential reign, from AD 527 to 565, in which he dominated the sixth-century. This was an important period in the transition between the classical and Byzantine worlds, and one which saw significant territorial changes and religious developments. Many of Justinian's other reforms, such as those in the governance of the empire and his codification of its laws, also had a long-lasting influence.

The first section of this book outlines the current questions we are asking about Justinian today. Five chapters explore his rise to power and the role of the colourful Theodora, foreign policy on the eastern frontier and the recovery of the western provinces, religious policy and governance of the empire. The sixth chapter considers the role of culture and society in the sixth century.

Justinian's reign is documented through a wide range of contemporary written sources, as well as numismatic and epigraphic evidence and images of the imperial couple. The second section contains over eighty examples of these records, including English translations of the sources and images of coins and other objects.

Fiona Haarer is a Visiting Fellow and teaches Ancient Greek at King's College London. Her research focuses on the history, literature and culture of the fifth and sixth centuries and she is the author of The Emperor Anastasius I: Politics and Empire in the Late Roman World (2006).