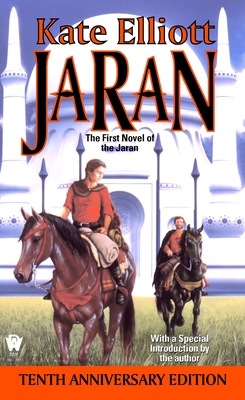 
This title is likely unavailable. Email or call for price and availability.
Tess had been cursed by an accident of birth, cursed to be the sister of the one man honored by the alien conquerors of human-run space. Her brother, Charles Soerensen, the leader of Earth’s rebellion, had been given a dukedom after his defeat and now ruled over far-distant worlds. And Tess was his only heir, a position and a responsibility she was not yet willing to assume. So she fled to a world in her brother’s domain, a world where—she was soon to discover—the alien conquerors were themselves involved in some covert and dangerous mission.

And despite herself, Tess was suddenly forced to become both player and pawn in an interstellar game of intrigue and politics, caught between protecting her brother’s interests, and her own growing involvement with Ilya the leader of the nomadic tribe with whom she had taken shelter. But it soon became apparent to Tess that whether Charles or the aliens were the victors here, Ilya and his people were balanced at a crucial point in their history—a point at which they must either learn to adapt to the incursions of more advanced civilizations or, by remaining rooted in their own traditions, face inevitable extinction.
Kate Elliott’s credits include the Nebula finalist novel, King’s Dragon, its sequels, Prince of Dogs, The Burning Stone, Child of Flame, and The Gathering Storm; her groundbreaking DAW science fiction series, The Novels of Jaran—Jaran, An Earthly Crown, His Conquering Sword, and The Law of Becoming; and her magnificent fantasy collaboration with Melanie Rawn and Jennifer Roberson, The Golden Key. She now lives in Hawaii with her husband, three children, and a dog. She can be found at kateelliott.com.