Movie Speak: How to Talk Like You Belong on a Film Set (Paperback) 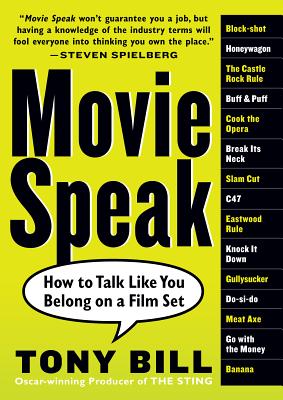 Movie Speak: How to Talk Like You Belong on a Film Set (Paperback)


Available in Warehouse. Wait for Email Confirmation for ETA
“Movie Speak won’t guarantee you a job, but having a knowledge of the industry terms will fool everyone into thinking you own the place.” — Steven Spielberg

“Finally a book that celebrates the process—the dynamic web of people, technique, and artistry—underneath every foot of celluloid.” —Jodie Foster

Uncover the secret language of movie-making in a handbook for film buffs and language-lovers, as well as anyone who aspires to break into the business, with hundreds of essential terms, explained. Opening a window into the fascinatingly technical, odd, colorful, and mysterious working language of movies, Oscar-winning producer, actor, and director Tony Bill sheds light on the hugely complex process of making a film, as well as on the hierarchies between the cast and crew and the on-set etiquette of any movie production.

From why the Assistant Director calls “wrap” to the real reason Hollywood stars began wearing sunglasses, Movie Speak offers tricks of the trade learned over decades in Hollywood—to help you crack the code of the movie business.

Tony Bill started out in Hollywood as an actor, became an Oscar-winning producer (The Sting), and then a director for film (My Bodyguard, Five Corners, Untamed Heart, Flyboys, and more) and television (Truman Capote's "One Christmas," Harlan County War, Pictures of Hollis Woods). He teaches and lectures widely on film and lives with his family in the oldest house in Venice, California.

“It's about time our code was broken. What a wonderful insight into our business! Tony: Don't make this the martini!” * —Dennis Hopper

“Finally, a book that celebrates the process—the dynamic web of people, technique, and artistry—underneath every foot of celluloid.” —Jodie Foster

“Movie Speak is entertaining and edifying. I'll never again as the sound-dude to move that fuzzy-thing-on-the-end-of-a-stick out of my shot.” —John Sayles

* martini: The term for the last show of the day, the origin of which might seem self-evident—but it's not. The martini actually refers to the saying "The next shot is in a glass." Get it?