I Love You with All My Butt!: An Illustrated Book of Big Thoughts from Little Kids (Hardcover) 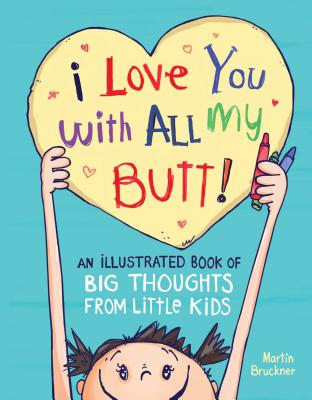 We just can’t get enough of the funny stuff kids say. We share our own children’s gems with friends and family. If we’re smart, we write down these scraps of accidental poetry. And we turn them into books.

Martin Bruckner is an artist and father who not only recorded the sayings of his daughter, Harper, but used each as the inspiration for a work of art. After posting them on social media, Bruckner became the artist that other parents sought out to transform their own children’s funny words into artwork. Collected here are 100 mini-posters of pure delight, a marriage of the children’s surprising wisdom and the artist’s nimble style, plus the occasional backstory that amplifies both.

Every parent will recognize the spirited declarations of personality—“I’m training to be a wolf.” The endearing mangling of language—“Mommy, I don’t need your mouth to talk to me right now.” The creative mixing of metaphors—“I need a tissue to wipe my feelings.” Those precious, heartbreaking outbursts without guile or filters—“I only love you at the toy store.” Illustrated with sweetness and whimsy, each is a window into the irresistible innocence of childhood, even if the sentiment is “Dad, please wipe the bum of this beautiful princess.”

Martin Bruckner, Everydad and artist in Omaha, Nebraska, is the creator of the blog Spaghetti Toes—where he posted illustrations of the hilarious things said to and by his daughter, Harper—which rocketed to viral fame in early 2015. Bruckner’s work has been featured on sites such as the Huffington Post, the Today show, BuzzFeed, and the Daily Mail, paving the way for partnerships with Care.com, Charmin, and Disney. Bruckner is Creative Director at Wes and Willy, an upscale boys clothing company, and also is the founder of Creatureland Studio, a side project in which Bruckner reimagines children’s drawings as full-color computer-generated artwork.

"The book is both touching and hilarious."  — Real Simple