How to Survive a Human Attack: A Guide for Werewolves, Mummies, Cyborgs, Ghosts, Nuclear Mutants, and Other Movie Monsters (Paperback) 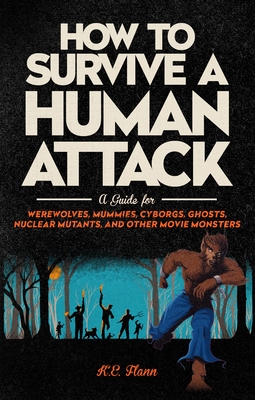 How to Survive a Human Attack: A Guide for Werewolves, Mummies, Cyborgs, Ghosts, Nuclear Mutants, and Other Movie Monsters (Paperback)

Did you know human attacks account for a staggering 100 percent of premature deaths for witches, swamp monsters, cyborgs, and other supernatural, mutant, and exceptionally large beings?

The past millennia or so has seen not only an uptick in human attacks, but also increasingly indiscriminate victim selection. It is understandable to feel overwhelmed. From renowned preternaturalist K. E. Flann, How to Survive a Human Attack provides critical information at a critical time with chapters specifically tailored to their target audience, including:

·  A Zombie’s Guide to Filling the Emptiness and Moving Forward

·  What’s Happening to My Body?: Radioactive Mutants and the Safety of the Nuclear Family

K.E. Flann's writing has been featured in McSweeney's Internet Tendency, The North American Review, Shenandoah, and Michigan Quarterly Review, and a collection of short stories won the 2014 George Garrett Award at Texas Review Press. Excerpts from this incredibly important work have appeared or will appear in Word Riot, The Higgs Weldon, Defenestration, and Monkeybicycle.
As a cyborg manufactured in 2067 and sent back in time to KILL ALL HUMANS, I found the advice in this book invaluable in blending in with the puzzling society of today.—Dan Vebber, co-executive producer, The Simpsons and Futurama

As a member of the walking undead, nothing ruins my day quite like some yahoo pulping my noggin with a baseball bat wrapped in barbed wire. Thank goodness How to Survive a Human Attack is here to help me avoid detection while doggedly roaming the earth seeking the human brains I crave.—Rich Dahm, co-executive producer, The Colbert Report and The Middle