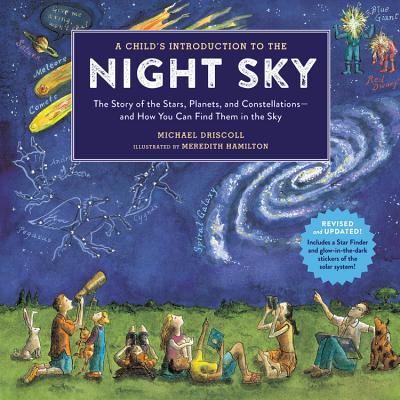 
Available in Warehouse. Wait for Email Confirmation for ETA
This charming exploration of the night sky -- featuring a star finder and glow-in-the-dark stickers -- which has more than a quarter of a million young astronomers enjoying the night sky in countries around the world, is now completely revised and updated.
A Child's Introduction to the Night Sky is the perfect introduction to the always fascinating world of astronomy. Children ages eight and up will find out what astronomers have learned (and are still discovering), what astronauts and scientists explore, and what they can find by gazing up into the sky at night.
Author Michael Driscoll explains how stars are born, the achievements of the great scientists, the history of space exploration, the story of our solar system, the myths behind the constellations, how to navigate the night sky, and more.
Whimsical color illustrations throughout and handy definitions and sidebars help engage younger readers and develop their interest. Also included are a nifty star finder tool and fun glow-in-the-dark stickers.
Michael Driscoll is a senior publishing editor at Wall Street Journal. He is an award-winning news writer and editor who has contributed to Reuters, the Associated Press, L.A. Weekly and the New York Daily News, among other publications. He is the author of A Child's Introduction to Poetry and the editor of many books for children and adults. He lives in New York City, but grew up gazing at the wide-open skies of Texas.

Meredith Hamilton has illustrated eight books in the Child's Intro series. Her other illustration work includes apps for children, cookbooks, and Steuben glass. She lives in Brooklyn, NY.