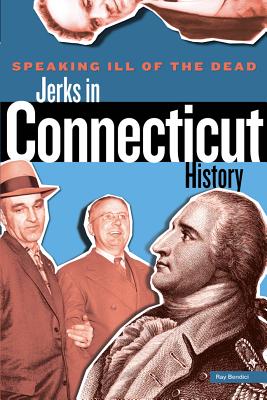 
This title is likely unavailable. Email or call for price and availability.
The lives of notorious bad guys, perpetrators of mischief, visionary--if misunderstood--thinkers, and other colorful antiheroes, jerks, and evil doers from history all get their due in the short essays featured in these enlightening, informative books. Sp.
Ray Bendici is associate editor at Connecticut Magazine, where he has covered the state in depth for over a decade, including through his monthly Sunday Drive and Being There columns. He also runs DamnedCT.com, which is dedicated to all that's odd, unexplained, unusual and curious in Connecticut.

"Ray Bendici's genuine and unending fascination with the strange underbelly of Connecticut makes him the perfect writer for this subject. He tells each jerk's story in a way that will keep you reading and learning even as you want to cover your eyes in horror."
—Charles A. Monagan, editor of Connecticut Magazine and author of Connecticut Icons
"Few writers are able to capture the cynicism and honest humor often found in the most bizarre crimes and circumstances, while, at the same time, spinning a great yarn, keeping the pages turning, and allowing the facts to drive the story. Ray Bendici has mastered this . . . in a captivatingly fresh narrative that will help you easily spot all the jerks in your life. A remarkably candid and especially sarcastic book, addictive and fascinating."
—M. William Phelps, national bestselling author and star of Investigation Discovery's Dark Minds