The Patchwork Path: A Quilt Map to Freedom (Paperback) 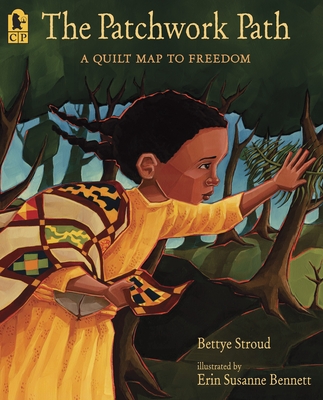 The Patchwork Path: A Quilt Map to Freedom (Paperback)


Available in Warehouse. Wait for Email Confirmation for ETA
The images stitched into Hannah's quilt lead to secret signposts on the Underground Railroad as she and her father take flight from slavery on a perilous path to freedom.

Now that Hannah’s papa has decided to make the run for freedom, her patchwork quilt is not just a precious memento of Mama — it’s a series of hidden clues that will guide them along the Underground Railroad to Canada. A fictionalized account of a fascinating oral history, The Patchwork Path tells the story of a two of the thousands who escaped a life of slavery and made the dangerous journey to freedom — a story of courage, determination, and hope.

- A Gustavus Myers Center for the Study of Bigotry and Human Rights Outstanding Book, Honorable Mention
Bettye Stroud is the author of several picture books that speak of her African American heritage, including DANCE Y'ALL, THE LEAVING, and DOWN HOME AT MISS DESSA'S. Of THE PATCHWORK PATH, she says, "I want my writing to be inspirational to children as they face the 'demons' I write about. I hope my readers see themselves and know they are not alone in facing disappointments. I want them to know all is never lost; there is always hope."

Erin Susanne Bennett is a recent graduate of the Savannah College of Art and Design. Of THE PATCHWORK PATH, her first book, she says, "Growing up in Rochester, New York, had a tremendous impact on my awareness of the Underground Railroad. Illustrating THE PATCHWORK PATH has only deepened my appreciation for the immense strength, courage, and sacrifice embodied by African American slaves and those who fought with them for equality."
This works well as a story and also as a lesson in African-American history.
—School Library Journal

The exciting escape story makes the history immediate, and the fascinating quilt-code messages will have children revisiting the page that shows each symbol and its secret directions.
—Booklist