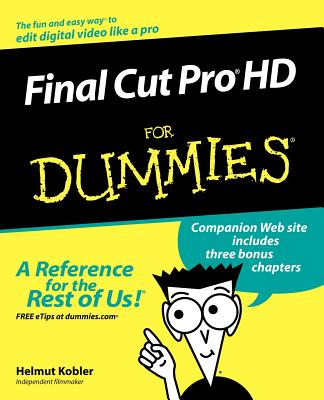 
Available in Warehouse. Wait for Email Confirmation for ETA
This book cannot be returned, cancelled, or exchanged. Please call for availability and pricing
Edit video like a pro

"Save it in the edit" is a common saying among film professionals. Editing makes the difference between boring vacation movies and exciting travelogues...between the whole dull news conference and the highlights on the evening news. Whether you're a budding Spielberg, a proud parent who wants two-year-old Junior's every feat documented for posterity, or a band that wants your music video to rock, Final Cut Pro HD For Dummies tells you what you need to know to edit regular digital or high definition video like a pro. It covers the basics of capturing, importing, and editing digital videos, with detailed how-to for:

Three bonus chapters online go into more depth about rendering, customizing the interface, and managing media so you can refine your skills even further.

Final Cut Pro HD For Dummies was written by Helmut Kobler, a Los Angeles-based filmmaker, owner of K2Films, and a frequent contributor to Macaddict Magazine. Having this book next to your editing equipment is the next best thing to having him sit next to you and guide you through the editing process.

Helmut Kobler is a Los Angeles-based filmmaker who has recently finished his latest project -- the sci-fi action adventure Radius. (You can see scenes from Radius in many of this book's figures.) Helmut's a confessed Mac addict (he writes many features and reviews for MacAddict magazine, in fact) and has been using the Mac since 1987. In a past life, he directed and produced award-winning video games for PCs and the Sony Playstation. If you want to know more about Helmut's film Radius -- and the 2-disc DVD that it's featured on -- visit the Web site, at www.radiusmovie.com.