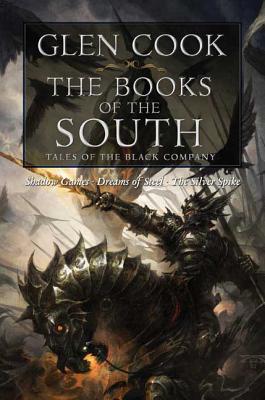 Marching south after the ghastly battle at the Tower of Charm, the Black Company is hounded by shadowy figures every inch of the way.

The game is on: the Company versus the Shadowmasters, deadly creatures that deal in darkness and sorrow.

The Book of the South is the second omnibus of novels from one of the greatest fantasy epics of our age, Glen Cook's Black Company series—collecting Shadow Games, Dreams of Steel, and The Silver Spike.

Born in 1944, Glen Cook grew up in northern California, served in the U.S. Navy, attended the University of Missouri, and was one of the earliest graduates of the well-known "Clarion" workshop SF writers. Since 1971 he has published a large number of Science Fiction and fantasy novels, including the "Dread Empire" series, the occult-detective "Garrett" novels, and the very popular "Black Company" sequence that began with the publication of The Black Company in 1984. Among his science fiction novels is A Passage at Arms.

After working many years for General Motors, Cook now writes full-time. He lives near St. Louis, Missouri, with his wife Carol.

“With the Black Company series Glen Cook singlehandedly changed the face of fantasy—something a lot of people didn’t notice and maybe still don’t. He brought the story down to a human level, dispensing with the cliché archetypes of princes, kings, and evil sorcerers. Reading his stuff was like reading Vietnam War fiction on peyote.” —Steven Erikson, author of Gardens of the Moon