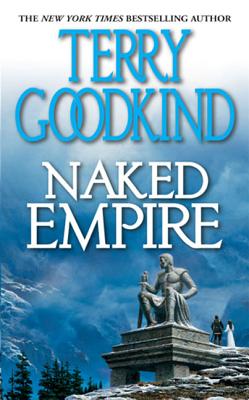 This is book number 8 in the Sword of Truth series.

Beginning with Wizard's First Rule and continuing with six subsequent fantasy masterpieces, Terry Goodkind has thrilled and awed millions of readers worldwide. Now Goodkind returns with a broad-canvas adventure of epic intrigue, violent conflict, and terrifying peril for the beautiful Kahlan Amnell and her husband, the heroic Richard Rahl, the Sword of Truth.

Richard Rahl has been poisoned. Saving an empire from annihilation is the price of the antidote. With the shadow of death looming near, the empire crumbling before the invading hordes, and time running out, Richard is offered not only his own life but the salvation of a people, in exchange for delivering his wife, Kahlan, into bondage to the enemy.

Terry Goodkind (1948-2020) is a #1 New York Times bestselling author. His books include the multi-volume epic fantasy Sword of Truth series—beginning with Wizard’s First Rule—and related series Richard and Kahlan and The Nicci Chronicles.

Goodkind was born and raised in Omaha, Nebraska, where he also attended art school. Alongside a career in wildlife art, he was also a cabinetmaker and a violin maker, and did restoration work on rare and exotic artifacts from around the world. In the 1990s he relocated to Nevada, where, when not writing novels, he was a racing-car enthusiast.

“Wonderful.” —Kliatt on Stone of Tears

“Each volume of the Sword of Truth...proves more difficult to review than the last. There are only so many was of heaping praise on a series that gets better and better.” —SFX on Blood of the Fold

“...outstanding work...adrenaline and characters who actually behave like adults. Highly recommended.” —San Diego Union Tribune on Temple of the Winds

“...thoroughly enjoyable.” —VOYA on Soul of the Fire