In the Kingdom of All Tomorrows: Eirlandia, Book Three (Eirlandia Series #3) (Hardcover) 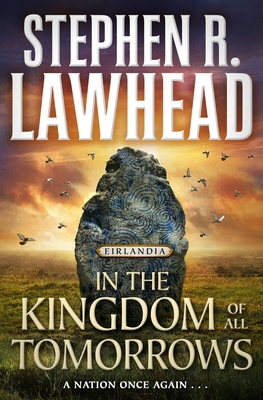 In the Kingdom of All Tomorrows: Eirlandia, Book Three (Eirlandia Series #3) (Hardcover)

This is book number 3 in the Eirlandia Series series.

Stephen R. Lawhead, the critically-acclaimed author of the Pendragon Cycle, concludes his Eirlandia Celtic fantasy series with In the Kingdom of All Tomorrows.

Conor mac Ardan is now clan chief of the Darini.

Tara’s Hill has become a haven and refuge for all those who were made homeless by the barbarian Scálda.

A large fleet of the Scálda’s Black Ships has now arrived and Conor joins Eirlandia’s lords to defeat the monsters. He finds treachery in their midst…and a betrayal that is blood deep.

And so begins a final battle to win the soul of a nation.

The Eirlandia Series:
#1) In the Region of the Summer Stars
#2) In the Land of the Everliving
#3) In the Kingdom of All Tomorrows

STEPHEN R. LAWHEAD is the internationally renowned author of the bestselling Pendragon Cycle, which received critical acclaim for its creative retelling of the Arthur legend and its historical credibility. In addition to that series, he is the author of more than 28 novels and numerous children's and nonfiction books of fantasy and imaginative fiction, including the award-winning Song of Albion trilogy. Lawhead makes his home in Oxford, England, with his wife, Alice.

Praise for the Eirlandia Series

“Fierce companions, mighty foes, and fae magic all intertwine with multiple points of view in an exciting tale.”—Booklist on In the Region of the Summer Stars

“Brilliant storytelling filled with lyrical language.”—RT Book Reviews on In the Region of the Summer Stars

“Lawhead brilliantly creates an authentic and vivid Arthurian Britain, and never forsakes a sense of wonder.”—Publishers Weekly on Pendragon

“Lawhead demonstrates a genuine love for and understanding of Anglo-Celtic mythology.”—Library Journal on The Paradise War

“Lawhead treats his Celtic lore with respect.”—Kirkus on The Paradise War

“In the sweeping style of George R.R. Martin and J.R.Tolkien, Lawhead has created a diverse universe and rich cast of characters.”—Library Journal on Bright Empires