The Heart of the Buddha's Teaching: Transforming Suffering into Peace, Joy, and Liberation (Paperback) 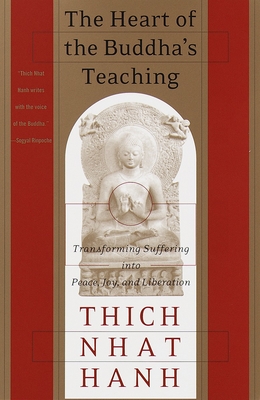 The Heart of the Buddha's Teaching: Transforming Suffering into Peace, Joy, and Liberation (Paperback)

With poetry and clarity, Thich Nhat Hanh imparts comforting wisdom about the nature of suffering and its role in creating compassion, love, and joy – all qualities of enlightenment.

“Thich Nhat Hanh shows us the connection between personal, inner peace, and peace on earth.”—His Holiness the Dalai Lama

In The Heart of the Buddha’s Teaching, now revised with added material and new insights, Nhat Hanh introduces us to the core teachings of Buddhism and shows us that the Buddha’s teachings are accessible and applicable to our daily lives.

Covering such significant teachings as the Four Noble Truths, the Noble Eightfold Path, the Three Doors of Liberation, the Three Dharma Seals, and the Seven Factors of Awakening, The Heart of the Buddha’s Teaching is a radiant beacon on Buddhist thought for the initiated and uninitiated alike.

Thich Nhat Hanh is a Vietnamese Buddhist monk, poet, and peacemaker who was nominated by Dr. Martin Luther King Jr. for the Nobel Peace Prize. The author of many books, including Living Buddha, Living Christ, he lives in France in the monastic community known as Plum Village and lectures and gives retreats regularly in North America.
“Thich Nhat Hanh writes with the voice of the Buddha.”—Sogyal Rinpoche

“If there is a candidate for 'Living Buddha' on earth today, it is Thich Nhat Hanh.”—Richard Baker-roshi

“Thich Nhat Hanh shows us the connection between personal, inner peace, and peace on earth.”—His Holiness the Dalai Lama