Empire of Sin: A Story of Sex, Jazz, Murder, and the Battle for Modern New Orleans (Paperback) 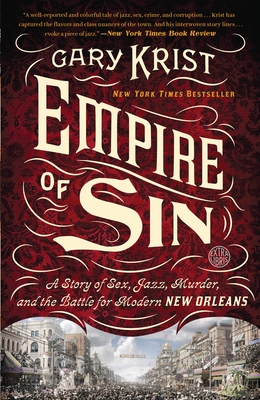 Empire of Sin: A Story of Sex, Jazz, Murder, and the Battle for Modern New Orleans (Paperback)


Available in Warehouse. Wait for Email Confirmation for ETA
From bestselling author Gary Krist, a vibrant and immersive account of New Orleans’ other civil war, at a time when commercialized vice, jazz culture, and endemic crime defined the battlegrounds of the Crescent City

Empire of Sin re-creates the remarkable story of New Orleans’ thirty-years war against itself, pitting the city’s elite “better half” against its powerful and long-entrenched underworld of vice, perversity, and crime. This early-20th-century battle centers on one man: Tom Anderson, the undisputed czar of the city's Storyville vice district, who fights desperately to keep his empire intact as it faces onslaughts from all sides. Surrounding him are the stories of flamboyant prostitutes, crusading moral reformers, dissolute jazzmen, ruthless Mafiosi, venal politicians, and one extremely violent serial killer, all battling for primacy in a wild and wicked city unlike any other in the world.
GARY KRIST has written for the New York Times, Esquire, Salon, the Washington Post Book World, and elsewhere. He is the author of the bestselling Empire of Sin, City of Scoundrels, and the acclaimed The White Cascade, as well as several works of fiction. He has been the recipient of the Stephen Crane Award, the Sue Kaufman Prize from the American Academy of Arts and Letters, a Lowell Thomas Gold Medal for Travel Journalism, and a fellowship from the National Endowment for the Arts.
Praise for Empire of Sin

"[A] well-reported and colorful tale of jazz, sex, crime, and corruption. I can attest, as a native of New Orleans, that in Empire of Sin [Krist] has captured the flavors and class nuances of the town. And his interwoven storylines, intentional or not, evoke a piece of jazz.”
—Walter Isaacson, New York Times Book Review

“[G]rander in scope and scale…an absorbing history with a body count…Politics, vice and culture are inextricable elements of the whole, and he covers them all with equal skill and devotion… Mr. Krist can turn a phrase with the best. He also allows his characters and sources plenty of opportunity to speak, with the result a delightful conversation. The remainder of Storyville’s tale…provides ample fodder for Mr. Krist’s talent as a storyteller and strength as a researcher. He has written the authoritative account of a raucous American experiment.”
—Wall Street Journal

"Empire of Sin had me at the subtitle—who could resist a tale that promises sex, jazz and murder in New Orleans?—and the (true) narrative brilliantly delivers. Mr. Krist guides us through a deliciously ribald time in Crescent City history, from the end of the Gilded Age to the dawn of Prohibition, when the city’s elite battled its prodigious and flamboyant underworld."
—Karen Abbot, author of Sin in the Second City and Liar, Temptress, Soldier, Spy

“Wide-reaching, vividly drawn…Empire of Sin is Krist's meticulously researched, mesmerizing account of New Orleans' outsized vice wars. The book itself is a masterful sleight-of-hand…Moving between parallel narratives, Krist simultaneously — and elegantly — layers more than 30 years of sharply drawn Crescent City social history. It's a backdrop as lush and intricate as a Mardi Gras Ball tableaux vivant — a raucous living portrait...Krist finesses this — lifting data and record to poetry — by procuring specific, redolent details from centuries-old documents…and from them the swirl of frontier New Orleans slides into view. Krist's expansive exploration of the decadeslong battle for New Orleans' soul in the end celebrates New Orleans' character, its essence: the city's long history of defiance and resilience; its ability to pivot in the midst of disaster. Empire of Sin isn't simply the story of how New Orleans came to be, but rather how New Orleans came to learn to fight.”
—Chicago Tribune

“While there have been many fine books and articles written about New Orleans’ Storyville era… Gary Krist’s “Empire of Sin” is certainly one of the most well-researched and well-written, a true-life tale of a sui generis American city that reads like a historical thriller… The book’s subtitle, A Story of Sex, Jazz, Murder, and the Battle for Modern New Orleans, sums up Krist’s story well — it’s a book both lurid and scholarly, and thoroughly entertaining.”
—Washington Post

“[I]n Gary Krist’s well-researched account of New Orleans’ turn-of-the-century underworld, there is no mistaking his affection for the ribald and rowdy...Krist is an enthusiastic raconteur of the forgotten. He tears through diaries and old newspapers, bringing fleshy life to what might otherwise dissolve into sepia.”
—The Seattle Times

"[E]xpertly described...a fascinating and colourful saga that, in the skilful hands of Krist, reads almost like a E L Doctorow novel and invites us all to take a trip 'way down yonder'."
—The Independent (UK)

"Nobody writes about decadence and disaster like Gary Krist...Krist, a superb writer of fiction as well as popular history, has re-created a time and place that we’ll never see again. Empire of Sin is packed with enough color, atmosphere and decadence to fill years of miniseries. You can almost hear Sidney Bechet’s clarinet and Louis Armstrong’s cornet floating through the pages."
—Dallas Morning News

"New Orleans' venal turn-of-the-century past has gotten a book worthy of the rich material in Gary Krist's Empire of Sin...Krist is masterful at presenting the material, is meticulous about sourcing."
—St. Louis Post Dispatch

"Unsolved mysteries, murderers on the loose, and the seamy side of the big city: It’s a juicy recipe for a story...a ton of lurid color and character...vivid and thoughtful."
—Boston Globe

“Gary Krist delves into a dark alley of New Orleans history and drags out a fantastically engaging story that, even though it’s 100 years old, still rings out today…A masterful bit of writing.”
—The Baton Rouge Advocate

“Krist deftly weaves Anderson's rise and fall into a much broader tale involving race relations, prostitution, jazz, and the underworld of Italian immigrants…What keeps it going are well-crafted vignettes and deftly rendered character profiles, in which reformers aren’t necessarily holy, and their targets are often possessed of considerable charm.”
—American Scholar

“Empire of Sin: A Story of Sex, Jazz, Murder, and the Battle for Modern New Orleans has something for everyone who has ever staggered down Bourbon Street with a Kindle. Krist spent a lot of time in the city’s great archival collections, wondering why our funky hometown got this way. And, boy did he latch onto a story.”
—New Orleans Times Picayune, 50 Fall Events Not to Miss

“Focusing on the battle for (and against) morality in 'the Sodom of the South' from the 1890s to the early 20th century, Krist’s hard-to-put-down read recounts a volatile time for vice in a town built on it.”
—Where New Orleans

"A fabulously rich and colorful chronicle of New Orleans at the turn of the century."
—Acadiana Lifestyle

“This engaging work covers the brief and exciting history of Storyville...Krist delivers on his lurid subtitle with stories of the flourishing sex industry, the birth of jazz in New Orleans, and the unsolved case of the "Axman"…Highly recommended for readers interested in New Orleans and also for those looking for a readable collection of true stories from one of America's most fascinating metropolises.”
—Library Journal, Starred Review

“[An] in-depth, seasoned analysis of the creation, growth, and downfalls of New Orleans, particularly its colorful Storyville area, which was indeed the site of vice and murder of all sorts but also of the birth of entrepreneurships and a music unparalleled in the U.S. of the time…Krist’s well-researched and -told history of New Orleans is an eye-opening tale of a melting pot…. There are characters here, genial, business-savvy, and cruel; concerted efforts to live and let live, along with lawlessness; and righteous reformers, all wrapped into a captivating history of an era and locale that ultimately touched much of America’s arts, attitudes, and outlook. A fascinating, detail-filled tribute to a city and an era.”
—Booklist

“In the vein of Erik Larson’s best seller The Devil in the White City, Gary Krist’s exposé of New Orleans at the turn of the century…proves that truth really is stranger than fiction by detailing the prominent figures within Storyville, the Crescent City’s red-light district….Fans of Boardwalk Empire would enjoy this crime thriller as well.”
—Library Journal, Top 10 Editors’ Picks BEA 2014

"Chronicling New Orleans' history from 1890-1920, Empire of Sin delves into the most shady, sexy, and shameful parts of the Crescent City's past. Even if you are familiar with jazz origins, the Axman murders, or Storyville, Krist introduces a whole slew of personalities that will keep you intrigued from start to finish."
—BookPeople