Censored: A Literary History of Subversion and Control (Hardcover) 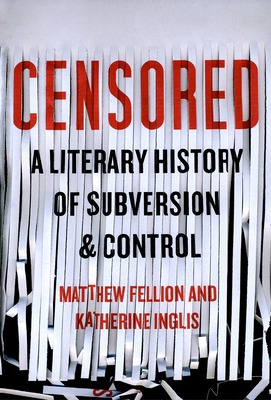 Censored: A Literary History of Subversion and Control (Hardcover)


This title is likely unavailable. Email or call for price and availability.
When Henry Vizetelly was imprisoned in 1889 for publishing the novels of Émile Zola in English, the problem was not just Zola’s French candour about sex – it was that Vizetelly’s books were cheap, and ordinary people could read them. Censored exposes the role that power plays in censorship. In twenty-five chapters focusing on a wide range of texts, including the Bible, slave narratives, modernist classics, comic books, and Chicana/o literature, Matthew Fellion and Katherine Inglis chart the forces that have driven censorship in the United Kingdom and the United States for over six hundred years, from fears of civil unrest and corruptible youth to the oppression of various groups – religious and political dissidents, same-sex lovers, the working class, immigrants, women, racialized people, and those who have been incarcerated or enslaved. The authors also consider the weight of speech, and when restraints might be justified. Rich with illustrations that bring to life the personalities and the books that feature in its stories, Censored takes readers behind the scenes into the courtroom battles, legislative debates, public campaigns, and private exchanges that have shaped the course of literature. A vital reminder that the freedom of speech has always been fragile and never enjoyed equally by all, Censored offers lessons from the past to guard against threats to literature in a new political era.
Matthew Fellion is a writer and independent scholar. He lives in Edinburgh. Katherine Inglis is a lecturer in the Department of English Literature at the University of Edinburgh.
“This comprehensive look at the scandals, legal debates, and political fallout created by writers from John Cleland to Marjane Satrapi provides a forceful argument for enthusiastically supporting Banned Books Week each fall. Taking a chronological approach, Fellion and Inglis neatly combine absorbing details about the publication history of 25 texts with a convincing explanation of how suppression has changed - and why it is still going strong. Highly recommended.” Choice

“Fellion and Inglis have produced a worthwhile, well-researched, and fascinatingly cross-referenced work that brings to light not only great literary facts but also historical contexts in which certain works were produced. This book employs a thematic literary approach--balancing polemic and sheer learning--that will appeal to readers of the classics as they revel in the exploration of all life's aspects.” Library Journal