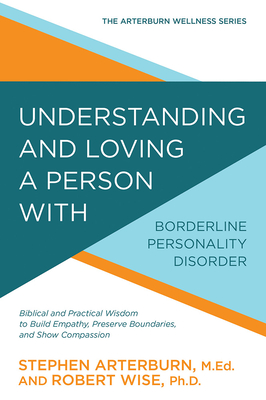 Borderline personality disorder (BPD) is a mental illness that can make loved ones feel as if it is their fault. Stephen Arterburn and Dr. Robert Wise wants readers to know it’s not their fault and there is hope. In this book, they offer readers advice on how to relate to people with BPD at home, work, and church. Readers don’t need to feel alone any longer. Help is on the way.

Stephen Arterburn, M.Ed., is the founder and chairman of New Life Ministries and the host of the nationally syndicated Christian counseling talk show New Life Live! heard by over two million people each week on nearly two hundred radio stations nationwide. He is the bestselling author of books such as Every Man’s Battle and Healing Is a Choice. With over eight million books in print, Arterburn has been writing about God’s transformational truth since 1984. His ministry focuses on identifying and compassionately responding to the needs of those seeking healing and restoration through God’s truth.

Reverend Robert L. Wise, Ph.D., is an archbishop in the Communion of Evangelical Episcopal Churches. In 2014, Pope Francis appointed Wise to be his Apostolic Representative for Christian Unity. Wise is the author of numerous articles published in multiple languages and thirty-four published books.