As a Man Thinketh (Classic Thoughts and Thinkers #1) (Hardcover) 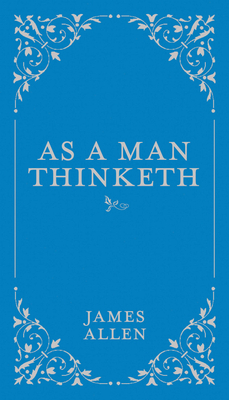 As a Man Thinketh is James Allen's third book, first published in 1903. In it, he details how man is the creator and shaper of his destiny by the thoughts which he thinks. He rises and falls in exact accordance with the character of the thoughts which he entertains. His environment is the result of what he has thought and done in the past, and his circumstances in the future are being shaped and built by his present desires, aspirations, thoughts and actions. He therefore who chooses and pursues a particular line of thought, consciously builds his own destiny.

Part of the New Thought Movement, Allen reveals the secrets to having the most fulfilling existence possible, and it’s easier than any of us could have imagined. The title for the essay comes from the Bible: “As a man thinketh in his heart, so is he,” Proverbs, chapter 23, verse 7. In more than a century, As A Man Thinketh has become an inspirational classic, selling millions of copies worldwide and bringing faith, inspiration, and self healing to all who have encountered it. In this new edition of As A Man Thinketh, readers will be enthralled by James Allen’s thoughts and direction to take charge of their own destiny, as it has for over 100 years.

In the series Classic Thoughts and Thinkers, explore some of the most influential texts of our time along with the inner workings of its greatest thinkers. With works from great American figures such as Theodore Roosevelt and Emily Dickinson and seminal documents including the Constitution of the Unites States, this series focuses on the most reflective and thought-provoking writings of the last two centuries. These beautiful hardcovers are the perfect historical perspective for meeting the challenges of the modern world.

Other titles in this series include:  Autobiography of Benjamin Franklin, Collected Poems of Robert Frost, Common Sense, Constitution of the United States with the Declaration of Independence, Helen Keller, Narrative of the Life of Frederick Douglass, Selected Poems of Emily Dickinson, and Theodore Roosevelt’s Words of Wit and Wisdom.