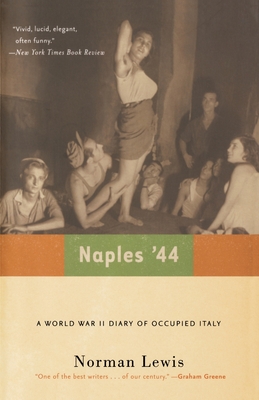 
Available in Warehouse. Wait for Email Confirmation for ETA
From the author Graham Greene called "one of our best writers, not of any particular decade but of our century," comes a masterpiece about a war-ravaged city under occupation

As a young intelligence officer stationed in Naples following its liberation from Nazi forces, Norman Lewis recorded the lives of a proud and vibrant people forced to survive on prostitution, thievery, and a desperate belief in miracles and cures. The most popular of Lewis's twenty-seven books, Naples '44 is a landmark poetic study of the agony of wartime occupation and its ability to bring out the worst, and often the best, in human nature. In prose both heartrending and comic, Lewis describes an era of disillusionment, escapism, and hysteria in which the Allied occupiers mete out justice unfairly and fail to provide basic necessities to the populace while Neapolitan citizens accuse each other of being Nazi spies, women offer their bodies to the same Allied soldiers whose supplies they steal for sale on the black market, and angry young men organize militias to oppose "temporary" foreign rule. Yet over the chaotic din, Lewis sings intimately of the essential dignity of the Neapolitan people, whose traditions of civility, courage, and generosity of spirit shine through daily. This essential World War II book is as timely a read as ever.

"Norman Lewis is one of the greatest twentieth-century British writers and Naples '44 is his masterpiece. A lyrical, ironic, and detached account of a tempestuous, byzantine, and opaque city in the aftermath of war." -- Will Self
Norman Lewis was one of the greatest travel writers in the English language. He is the author of thirteen novels and fourteen works of nonfiction, including The Tomb in Seville and Naples '44 (both published by Carroll & Graf). His other books include A Dragon Apparent; Golden Earth; and The Honoured Society, a nonfiction study of the Sicilian Mafia. Norman Lewis died in 2003 at age ninety-three.