A Century of American Toys and Games: The Story of Pressman Toy (Hardcover) 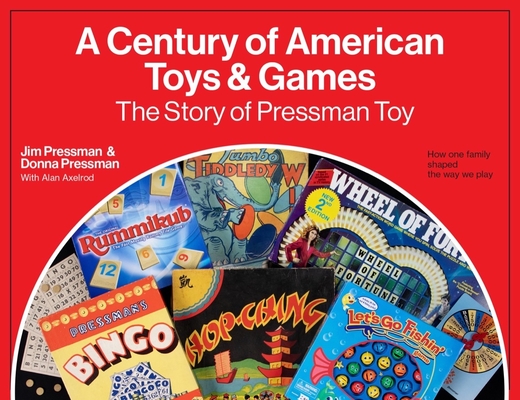 A Century of American Toys and Games: The Story of Pressman Toy (Hardcover)

When Jack Pressman went into business as a manufacturer of basic playthings like lead soldiers and toy xylophones in 1922, he could little have imagined that his small venture would become one of the iconic American toy companies. The firm scored its first megahit in the 1920s, when it popularized Chinese checkers, and it went on to introduce enduring favorites like Rummikub and Tri-Ominos. Today the Pressman Toy Corporation remains well known for its line of classic board games in eye-catching red boxes, as well as games based on popular TV shows.

This centennial history traces the growth of the company under the leadership of three successive Pressmans: Jack, his wife Lynn (one of the first female CEOs in the industry), and their son Jim. It is a story that reflects the development of the toy industry as a whole—encompassing the rise of plastics, the emergence of character licensing and TV advertising, and the surprising endurance of the physical board game in our digital age. Abundantly illustrated with new color photography as well as rare archival images, this will be an essential volume for anyone with an interest in the history of play.

Jim Pressman was president of the Pressman Toy Corporation from 1977 until the company’s sale to Goliath Games in 2014.

Donna Pressman is his wife and frequent collaborator.

Alan Axelrod is the author of numerous books on business and history, including Everything I Know about Business I Learned from Monopoly.