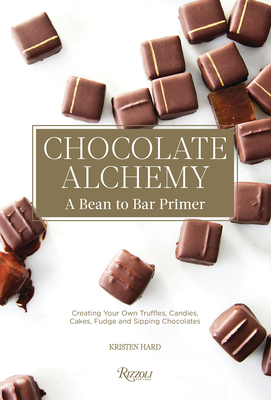 
This title is likely unavailable. Email or call for price and availability.
Finally, the first book to reveal the complete bean-to-bar process of creating chocolate from scratch in your own kitchen, plus over 100 recipes for delectable cacao treats.

Through easy-to-understand recipes, Chocolate Alchemy makes creating your own chocolate at home accessible to everyone, whether you are an avid cook or simply a chocolate lover. Called a “female pioneer of bean-to-bar chocolate,” Kristen Hard shares her philosophy and secrets to making chocolate, with clear instructions on minimal-processing techniques without additives.

The book is filled with more than 100 innovative recipes that showcase chocolate’s complex flavor, from pink peppercorn ginger truffles and hickory-smoked caramels to chocolate oatmeal cream pies and raw almond bark. Step-by-step photographs guide the home cook, but also allow for experimentation and customization. Chocolate Alchemy gives chocolate addicts the knowledge and confidence to set up their own chocolate laboratory and craft confections and baked goods with the true flavors of chocolate as the star of the show.
Kristen Hard had her first chocolate epiphany while in Martinique, when she discovered cacao trees growing in the forest. In 2008, she opened Cacao Atlanta, the first bean-to-bar chocolate maker in the Southeast. Its mission is to make chocolate bars and confections from scratch using beans sourced directly from farmers. Cacao products are sold in three original shops in Atlanta and in select Williams-Sonoma and other specialty food stores nationwide. Hard has been featured in Food & Wine, Bon Appetit, Town & Country, Details, Country Living, and Travel + Leisure.

Bill Addison is the James Beard Award-winning restaurant editor and national critic for Eater. He travels constantly, writing reviews and features that document every facet of America’s ever-evolving dining culture. Prior to joining Eater in spring 2014, he spent five years as Atlanta magazine’s food editor and restaurant critic. He began his food-writing career at Creative Loafing, Atlanta’s leading alt-weekly newspaper, in 2002; he has also been a food critic for the San Francisco Chronicleand lead restaurant critic at the Dallas Morning News.