Macromedia Flash MX ActionScript for Fun and Games [With CDROM] (Other) 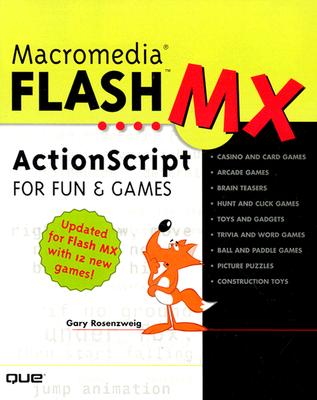 Macromedia Flash MX ActionScript for Fun and Games [With CDROM] (Other)


This title is likely unavailable. Email or call for price and availability.
Gary Rosenzweig is a game designer, programmer, entrepreneur, and the author of eight other books on Macromedia Director and Flash. He owns and operates CleverMedia, a Shockwave game development company that runs four game sites on the Internet: http: //clevermedia.com, http: //gamescene.com, http: //gamespark.com, and http: //flasharcade.com. Since founding CleverMedia in 1996, the company has produced more than 200 games. The games on the four sites that make up the "CleverMedia Network" are all free for Web surfers to play. Many of the games have also been licensed to other Web sites. Rosenzweig started in the multimedia business by obtaining a bachelor's degree in computer science from Drexel University in Philadelphia. His interest in newspapers took him to the University of North Carolina in Chapel Hill, where he earned a master's degree in journalism and mass communication. Rosenzweig wrote his first book in 1995 on Macromedia Director Lingo and distributed it free on the Internet. In 1996, The Comprehensive Guide to Lingo was published by Ventana, followed the next year by The Director 6 Book. In 1999, Special Edition Using Director 7 was published by Que. That was followed by Special Edition Using Director 8 and then 8.5. After Macromedia Flash 5 ActionScript for Fun & Games, Gary wrote Sams Teach Yourself ActionScript in 24 Hours. Gary has also spoken at many Macromedia user conferences and the Game Developers Conference. Gary reads a lot of classic science fiction books, likes to go to the movies, and enjoys travel. Gary's wife, Debby, owns and runs The Attic Bookstore (http: //www.atticbookstore.com/), a used-book store. Gary and Debby live in Denver, Colorado, with their cat, Lucy, and dog, Natasha.