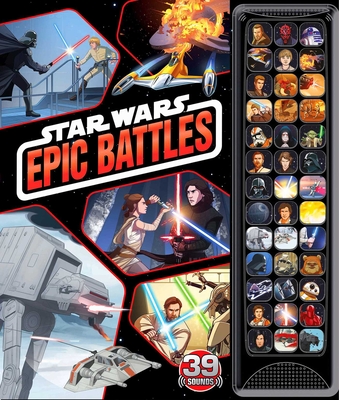 
This title is likely unavailable. Email or call for price and availability.
An amazing Star Wars sound book for fans who can't get enough of this timeless saga. This collection includes the most iconic battles and sound bites to play while reading this interactive storybook.

A must-have for every Star Wars fan who can't get enough of their favorite saga or wants to introduce these classics to the next generation. This 39-button sound book is filled with the most iconic story moments and epic battles between good and evil. Whether in hyperspace or on various planets from Tatooine to Endor, explore the distinct sights and sounds of the unique Star Wars universe in this action-packed storybook.
Benjamin Harper worked as an editor at Lucas Licensing. He edited many Wizards of the Coast roleplaying publications, including Star Wars Gamer magazine, Rebellion Era Sourcebook, The Dark Side Sourcebook, and the Living Force Campaign Guide. During his time at Lucasfilm, he also wrote several news articles about Star Wars celebrities for the recurring Star News and Star Sightings features in Star Wars Insider magazine. Harper has published more than 40 titles, including four Star Wars trivia books.