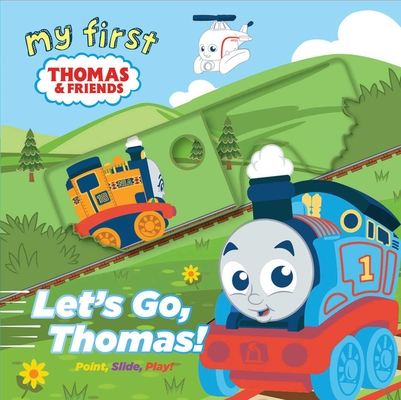 
This title is likely unavailable. Email or call for price and availability.
Slide into story time with Thomas and friends in this colorful board book!

Thomas and his friends are always on the move, and today is no different! These useful engines keep Sodor running by always trying their best. Move the sliders in this interactive storybook that includes kids' favorite engines—perfect for little hands!

Maggie Fischer is originally from Oregon, but now lives in Seattle, Washington, after receiving her B.A. in English from Gonzaga University. The daughter of a children’s librarian, Maggie has grown up surrounded by books and feels impossibly lucky to write and edit books for kids. She spends her time trying not to get worried about the increasing number of crows in her backyard, petting her enormous cat, Finch, and drinking more coffee than is probably healthy.

Nigel Chilvers was born and raised in Aintree, just outside Liverpool, UK. After completing an Art Foundation at Hugh Baird College, he went on to study Illustration at Wolverhampton University. He originally trained as a paper-based artist until switching over to digital work in 1997. Since then, he has worked for many years freelancing in licensing, working on many character-based books for Thomas the Tank Engine, Bob the Builder, Noddy, and much more. In his spare time, if he's not training for triathlons, he can be found climbing the fells of the Lake District or the North Welsh mountains.