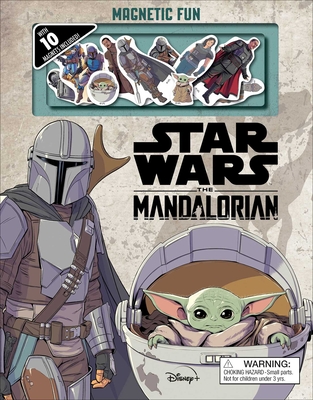 
This title is likely unavailable. Email or call for price and availability.
Young Star Wars fans will love following along as the Mandalorian, Grogu(TM), Cara Dune, and others journey throughout the galaxy in this fun, interactive magnetic book with 10 included magnets.

Following the fall of the Galactic Empire, a lone gunfighter travels to the outer rim of the galaxy far from the authority of the New Republic. There, he retrieves a mysterious bounty. Join the Mandalorian and his allies Cara Dune, Kuiil, Greef Karga, and IG-11 as they attempt to save the mysterious Grogu(TM) from the former Imperial Commander Moff Gideon. With magnetic pages and 10 included magnets, this interactive book is perfect for young Star Wars fans!
Grace Baranowski is originally from Arizona, but moved to San Diego, California, after receiving her B.A. in English from Occidental College. With a background in early childhood education, Grace loves being able to write and create exciting new content for children. In her free time, she enjoys exploring San Diego and all it has to offer.