Unchristian: What a New Generation Really Thinks about Christianity...and Why It Matters (Paperback) 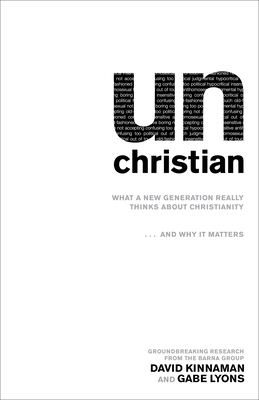 Unchristian: What a New Generation Really Thinks about Christianity...and Why It Matters (Paperback)


Available in Warehouse. Wait for Email Confirmation for ETA
Christianity has an image problem. Christians are supposed to represent Christ to the world. But according to the latest report card, something has gone terribly wrong. Using descriptions like "hypocritical," "insensitive," and "judgmental," young Americans share an impression of Christians that's nothing short of . . . unChristian.

Groundbreaking research into the perceptions of people aged 16-29 reveals that Christians have taken several giant steps backward in one of their most important assignments. The surprising details of the study, commissioned by the Fermi Project and conducted by The Barna Group, are presented with uncompromising honesty in unChristian. Find out why these negative perceptions exist, learn how to reverse them in a Christlike manner, and discover practical examples of how Christians can positively contribute to culture.

Now available in trade paper.
David Kinnaman is coauthor of unChristian, You Lost Me, and Good Faith. He is president of Barna Group, a leading research and communications company that works with churches, nonprofits, and businesses ranging from film studios to financial services. Since 1995, David has directed interviews with more than one million individuals and overseen hundreds of U.S. and global research studies. He and his wife live in California with their three children.Gabe Lyons is the author of The Next Christians: The Good News About the End of Christian America and the founder of Q--a learning community that mobilizes Christians to advance the common good in society. Prior to launching Q, Gabe cofounded Catalyst, a national gathering of young leaders. His work represents the perspectives of a new generation of Christians and has been featured by CNN, the New York Times, Fox News, and USA Today. Gabe, his wife, Rebekah, and their three children reside in Manhattan, New York.