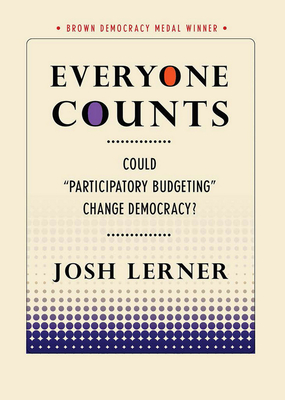 The Laurence and Lynne Brown Democracy Medal recognizes outstanding individuals, groups, and organizations that produce exceptional innovations to further democracy in the United States or around the world.The inaugural medal winner, the Participatory Budgeting Project (PBP), is an innovative not-for-profit organization that promotes "participatory budgeting," an inclusive process that empowers community members to make informed decisions about public spending. More than 46,000 people in communities across the United States have decided how to spend $45 million through programs that PBP helped spark over the last five years. In Everyone Counts, PBP co-founder and executive director Josh Lerner provides a concise history of the organization's origins and its vision, highlighting its real-world successes in fostering grassroots budgeting campaigns in such cities as New York, Boston, and Chicago. As more and more communities turn to participatory budgeting as a means of engaging citizens, prioritizing civic projects, and allocating local, state, and federal funding, this cogent volume will offer guidance and inspiration to others who want to transform democracy in the United States and elsewhere."The Participatory Budgeting Project exemplifies the essential features the award committee was looking for in its inaugural recipient. Political and economic inequality is part of the American national discussion, and participatory budgeting helps empower marginalized groups that do not normally take part in a process that is so critical for democratic life."-- John Gastil, Director of the McCourtney Institute for Democracy

Josh Lerner is Co-founder and Executive Director of the Participatory Budgeting Project and author of Making Democracy Fun: How Game Design Can Empower Citizens and Transform Politics.