History of My Life, 3 (Abridged / Paperback) 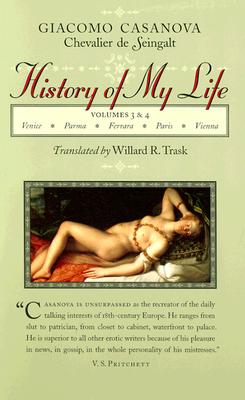 History of My Life, 3 (Abridged / Paperback)

Award-winning translation of the complete memoirs of Casanova available for the first time in paperback.

Volumes 3 and 4 offer some of the most extraordinary episodes in Casanova's extraordinary life, including his liaison with the nun M. M., and his flight from the State Inquisitor's prison--each in its own way a feat of singular dash and daring.

Because every previous edition of Casanova's Memoirs had been abridged to suppress the author's political and religious views and tame his vivid, often racy, style, the literary world considered it a major event when Willard R. Trask's translation of the complete original text was published in six double volumes between 1966 and 1971. Trask's award-winning translation now appears in paperback for the first time.

Giacomo Casanova was born in Venice in 1725. His parents, both actors, wanted him to become a priest, but their hopes were dashed when, at sixteen, he was expelled from seminary for immoral misconduct. Probably best-known for his reputation as a womanizer, Casanova was in turn a secretary, a soldier in the Venetian army, a preacher, an alchemist, a gambler, a violinist, a lottery director, and a spy. He translated Homer's Iliad into Italian and collaborated with Da Ponte on the libretto for Mozart's Don Giovanni. He retired in 1785 to the castle of a friend--Count Waldstein of Bohemia--in order to write his memoirs.