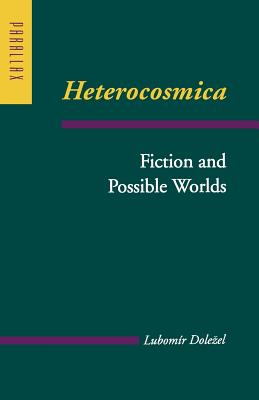 The universe of possible worlds is constantly expanding and diversifying thanks to the incessant world-constructing activity of human minds and hands. Literary fiction is probably the most active experimental laboratory of the world-constructing enterprise.--from the author's Preface

The standard contrast between fiction and reality, notes Lubom r Dolezel, obscures an array of problems that have beset philosophers and literary critics for centuries. Commentators usually admit that fiction conveys some kind of truth--the truth of the story of Faust, for instance. They acknowledge that fiction usually bears some kind of relation to reality--for example, the London of Dickens. But both the status of the truth and the nature of the relationship have baffled, frustrated, or repelled a long line of thinkers.

In Heterocosmica, Lubom r Dolezel offers nothing less than a complete theory of literary fiction based on the idea of possible worlds. Beginning with a discussion of the extant semantics and pragmatics of fictionality--by Leibniz, Russell, Frege, Searle, Auerbach, and others--he relates them to literature, literary theory, and narratology. He also investigates theories of action, intention, and literary communication to develop a system of concepts that allows him to offer perceptive reinterpretations of a host of classical, modern, and postmodern fictional narratives--from Defoe through Dickens, Dostoevsky, Huysmans, Bely, and Kafka to Hemingway, Kundera, Rhys, Plenzdorf, and Coetzee. By careful attention to philosophical inquiry into possible worlds, especially Saul Kripke's and Jaakko Hintikka's, and through long familiarity with literary theory, Dolezel brings us an unprecedented examination of the notion of fictional worlds.