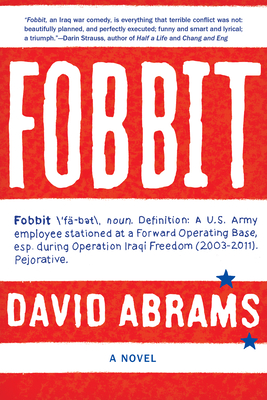 “Fobbit: U.S. Army employee stationed at a Forward Operating Base who avoids combat by remaining at the base. Abrams tells the tale of the military paper pushers and cubicle workers who take refuge at the base outside of Baghdad during Operation Iraqi Freedom. Fobbit life is portrayed in a witty and realistic retelling of military life, giving the reader a unique perspective on the brutality of war. Funny, captivating, and intelligent, Abrams' tale is based on his 20 years of experience in the Army.”
— Rachel Kelly, Sunriver Books, Sunriver, OR

“Fobbit: U.S. Army employee stationed at a Forward Operating Base who avoids combat by remaining at the base. Abrams tells the tale of the military paper pushers and cubicle workers who take refuge at the base outside of Baghdad during Operation Iraqi Freedom. Fobbit life is portrayed in a witty and realistic retelling of military life, giving the reader a unique perspective on the brutality of war. Funny, captivating, and intelligent, Abrams' tale is based on his 20 years of experience in the Army.”
— Rachel Kelly, Sunriver Books, Sunriver, OR

Fobbit \'f -bit\, noun. Definition: A U.S. soldier stationed at a Forward Operating Base who avoids combat by remaining at the base, esp. during Operation Iraqi Freedom (2003-2011). Pejorative. In the satirical tradition of Catch-22 and M*A*S*H, Fobbit takes us into the chaotic world of Baghdad's Forward Operating Base Triumph. The Forward Operating base, or FOB, is like the back-office of the battlefield - where people eat and sleep, and where a lot of soldiers have what looks suspiciously like a desk job. Male and female soldiers are trying to find an empty Porta Potty in which to get acquainted, grunts are playing Xbox and watching NASCAR between missions, and a lot of the senior staff are more concerned about getting to the chow hall in time for the Friday night all-you-can-eat seafood special than worrying about little things like military strategy. Darkly humorous and based on the author's own experiences in Iraq, Fobbit is a fantastic debut that shows us a behind-the-scenes portrait of the real Iraq war.

David Abrams served in the U.S. Army for twenty years, and was deployed to Iraq in 2005 as part of a public affairs team. He was named the Department of Defense's Military Journalist of the Year in 1994 and received several other military commendations. His stories have appeared in Esquire, Narrative, and other literary magazines. He lives in Butte, Montana.


A retired veteran whose 20-year career in the Army included a 2005 tour in Baghdad, Abrams is comfortable and convincing locating the action in Iraq. . . . Fobbit is a vicious skewering of this surprisingly large military subculture of war avoidance.”TIME

I applaud David Abrams for sticking to his vision and writing the satire he wanted to write instead of adding to the crowded shelf of war memoirs. In Fobbit, he has written a very funny book, as funny, disturbing, heartbreaking and ridiculous as war itself.”New York Times Book Review

Fobbit blends fiction and journalism, an apt reflection of literary influences combined with [Abrams’s] experience in an Army public affairs team. . . . Though absurd, these Dickensian characters are all so skillfully wrought that we quickly accept their idiosyncrasies. . . . What’s most intriguing about this work is that, at its center, it is both a clever study in anxiety and an unsettling expose of how the military tells its truths. Fobbit traces how the Army story” is crafted, the dead washed of their blood, words scrutinized, and success applied to disasters.”The Washington Post

An impressive Iraq war satire. . . .[Abrams has] a genuine sense of humor . . . and a productive sense of irony to go with it. Fobbit is an impressive debut and holds out promise for more good things to come.”Los Angeles Times

Fobbit seems less interested in what Iraq was like than in where it went wrong. . . . Abrams wants to reveal the comedy and absurdity of these cubicled soldiers - and, through them, of the entire conflict. . . . when it comes to war literature, a comic novel will always do a better job with the big picture. This is the first thing to take from Fobbit.”San Francisco Chronicle

A harrowing satire of the Iraq War and an instant classic. . . . Abrams’s prose is spot-on and often deadpan funny . . . This novel nails the comedy and the pathos, the boredom and the dread, crafting the Iraq War’s answer to Catch-22.”Publishers Weekly (starred review)

"Using diaries he kept as a public affairs man in Iraq in 2005, Abrams makes comedy from the clash between positive spin and personal terror."Men's Journal

A satire of comfortably numb life during wartime. . . . Abrams spent 20 years in the Army, including a tour of Iraq, and he merely has to lightly fictionalize his observations to point out the absurdities of American occupation.”Newsweek

[Fobbit] gives such full-blooded life to the soldiers whose pale, gooey center” is so antithetical to battlefield heroism that he propels the word into the everyday by the force of his narrative. . . . As mission builds upon mission, lie upon lie, Fobbit builds to its exclamation by terror and by tedium and by laughter. . . . Fobbit makes a sordid music of screams and makes its mark on Iraq war literature.”Minneapolis Star Tribune

Fobbit is hilarious, but the subject matter is deadly serious. This is a remarkable book because it was written by a man who served as a member of an army public relations team in Iraq, i.e. a fobbit himself. It is the rare writerindeed, the rare personwho can step outside of himself and see with cold clarity the humor and pathos of his situation and then bring the reader to the same understanding. David Abrams is such a writer.”Karl Marlantes, author of Matterhorn and What It Is Like to Go to War

"Fobbit is fast, razor sharp, and seven kinds of hilarious. It deserves a place alongside Slaughterhouse Five and Catch-22 as one of our great comic novels about the absurdity of war."Jonathan Evison, author of West of Here

"This delightful, readable, believable and useful book made me furious!"Tom McGuane

Fobbit, an Iraq-war comedy, is that rarest of good things: the book you least expect, and most want. It is everything that terrible conflict was not: beautifully planned and perfectly executed; funny and smart and lyrical; a triumph. This debut marks the arrival of a massive talent.”Darin Strauss, author of Chang and Eng and Half a Life

[Fobbit] is] like an Office-style satire that happens to be set on a military base in an active war zone. Its villains aren't suicide bombers but hectoring senior officers who make impossible demands.”Slate.com

You might not expect an Iraq War novel to be funny, but I laughedmore than onceas I read this one. I cringed, too. There’s simply so much to this book.” Fiction Writers Review

Fobbit is a tale of the Iraq war that manages to be as dark as it is funny, which is to say considerably. . . .[Abrams has] written a book that makes you laugh and makes you wince, often at the same time, all the while staying true to its message: that people are foolish on many levels, sometimes fatally so, but they are all motivated by the same basic needs, desires, and fears. . . . There are no heroes here, but no villains either. Each character fights his own war, and nobody wins.”The Millions

"Truly significant . . . a book about the absurdity of the way the war is fought, the way the war is projected back home, and the massive gulf between the two. . . . a cynical satire in the same vein as the best works of legendary wartime authors like Evelyn Waugh, Kingsley Amis, Kurt Vonnegut, and especially Joseph Heller. Like those authors, Abrams’ book is important for reasons beyond his genre or categorization as well. Perhaps most important, though, is the fact that he challenges Paul Fussell’s argument that the real war cannot be effectively presented in novels."The Rumpus

The insanity is linguistic, and Abrams’s dark humor about lying through language would appeal to George Orwell. . . . He is not mocking soldiers. His targets are stateside, residing in naïve government or civilian expectations about ground conditions in Baghdad (and elsewhere) two years after Saddam’s overthrow. . . . Fobbit invites us to laugh over our collective foolishnessfoolishness that sometimes includes deaths. That’s the toughest, most painful laughter of all.”Great Falls Tribune

The author describes Fobbit as an anti-stupidity’ novel, not an anti-war novel, and with 20 years’ service he has the evidence and flair to write the former. . . . Fobbit is bliss.”Military Times

Abrams shows these men and women in their natural habitats, stuck somewhere halfway between the actual violence of war and the goofy excess of American culture.”Book Riot

A unique behind-the-wire glimpse at life in the FOB and the process of spinning” a war for public consumption. A funny, hard-edged satire about recent history and modern war-making.”Library Journal

Sardonic and poignant. Funny and bitter. Ribald and profane.”Kirkus Reviews

If Vonnegut and Heller were the undisputed chroniclers of the madness of World War II, Abrams should be considered the resounding new voice of the Iraq War.”Montana Standard

Fobbit deserves a wide non-military audience. . . . Abrams, an Iraq war veteran himself, is able to portray not just the pointlessness and stupidity of the occupation but also its absurdity. . . . Fobbit is two things in one a scathing, deeply felt diatribe against military disasters large and small, and an often-hilarious examination of very human, very weak characters living next door to a combat zone. The good news is that you only have to buy one copy, and you should waste no time in doing so.”Bookreporter.com

Abrams has a definite comic talent and a lively turn of phrase. The set-pieces are well done . . . and the dialogue zings back and forth cheerily enough. Abrams is a good writer, in other words. . . . Much of the most interesting material in Fobbit is the stuff that reads like reportage or memoir.”The Guardian

Fobbit is a searing view of life on a Forward Operating Base in Iraq and the constant contradictions faced by U.S. soldiers who are told to kick down a door one minute and win hearts and minds’ the next. Funny and evocative, with great glimpses of soldier-speak and deployment day to day life, each laugh in the novel is accompanied with a troubling insight into the different types of battles that our soldiers encounter on a non-traditional battlefield.”Siobhan Fallon, author of You Know When the Men Are Gone

Fobbit should be required reading for America. Hilarious and tragic, it’s as if Louis C.K. and Lewis Black provided commentary to The Hurt Locker. There will be innumerable comparisons to Catch-22, but Fobbit, believe me, stands on its own.”George Singleton, author of Stray Decorum

"A darkly funny chronicle of the Iraq War, Fobbit explores the modern military machine with searing resolve. This is a book that speaks to the power of fictiona war story too profane and profound for the newspapers and the nightly news. Want to think, laugh and cry, all at the same time? Read this novel."Matt Gallagher, author of Kaboom

With a gimlet eye and humor as dry as a desert sandstorm, Abrams captures the absurdist angle of the Iraq war. A direct counterpoint to hero-worshipping shoot ’em up” combat narratives, Fobbit proves that wit is as lethal a weapon as any Army-issue M16 or .50 cal.”Lily Burana, author of I Love a Man in Uniform: A Memoir of Love, War, and Other Battles

The first major work of fiction about America’s war for Iraq.”Aaron Gwyn, author of Dog on the Cross and The World Beneath