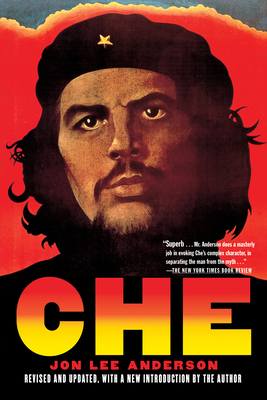 A New York Times Notable Book of the year.

Acclaimed around the world and a national best-seller, this is the definitive work on Che Guevara, the dashing rebel whose epic dream was to end poverty and injustice in Latin America and the developing world through armed revolution.

Jon Lee Anderson's biography traces Che's extraordinary life, from his comfortable Argentine upbringing to the battlefields of the Cuban revolution, from the halls of power in Castro's government to his failed campaign in the Congo and assassination in the Bolivian jungle.

Anderson has had unprecedented access to the personal archives maintained by Guevara's widow and carefully guarded Cuban government documents. He has conducted extensive interviews with Che's comrades--some of whom speak here for the first time--and with the CIA men and Bolivian officers who hunted him down. Anderson broke the story of where Guevara's body was buried, which led to the exhumation and state burial of the bones. Many of the details of Che's life have long been cloaked in secrecy and intrigue. Meticulously researched and full of exclusive information, Che Guevara illuminates as never before this mythic figure who embodied the high-water mark of revolutionary communism as a force in history.

Jon Lee Anderson began working as a reporter for the Lima Times in Peru in 1979. He has for many years been a staff writer at The New Yorker, covering stories all over the globe. His books include Guerrillas: Journeys in the Insurgent World, The Lion's Grave: Dispatches from Afhanistan, and The Fall of Baghdad. He lives in England with his wife and three children.

Superb . . . Mr. Anderson does a masterly job in evoking Ches complex character, in separating the man from the myth . . .The New York Times Book Review

Excellent . . . admirably honest [and] staggeringly researched . . . It is unlikely that after Andersons exhaustive contribution, much more will be learned about Guevara.Los Angeles Times

[Ches] ideal, that curious mixture of resoluteness and recklessness . . . is brilliantly evoked in Jon Lee Andersons massive biography which traces, with exacting precision, the avatars of Ches epic life . . . . The portrait is now as complete as it will ever be.The Times Literary Supplement (London)

An enduring achievement. It is hard to imagine that any [other biography] will match the volume and detail of research here. [Guevaras victories and failures, equally spectacular, are part of our common history.Che lives, not only in this book, but in the world. The Boston Globe

Groundbreaking. . . . Andersons book is an epic end run around the guardians of the Che legend. The New Yorker

A masterly and absorbing account of Latin Americas famous guerrilla leader . . . Andersons book, easily the best so far on Guevara, is a worthy monument to a flawed but heroic Utopian dreamer. The Sunday Times (London)

Remarkable . . . Andersons account is well rounded and far from uncritical . . . [his] journalistic flair and hard legwork are evident. Foreign Affairs

Exceptional and exciting . . . Andersons up-close look, with beauty marks and tragic flaws so effortlessly rendered, brings the reader face to face with a man whose unshakable faith in his beliefs was made more powerful by his unusual combination of romantic passion and a coldly analytical mind . . . An invaluable addition to the literature of American revolutionaries. Booklist

A solidly documented biography that succeeds, with brilliant effect, in stripping away the layers of demonization and hero worship that for so long have concealed the human core of this legendary figure. . . Thanks to Jon Lee Anderson, we now have the true story, the real man, a portrait of exceptional substance to confound the myth and enhance our understanding of the facts. The Kansas City Star

A skillful interviewer, Anderson elicited information from dozens of participants in Guevaras life.Combining contradictory sources and an immense amount of detail, Anderson produces a multifaceted view of Guevara as a person, seething with ambiguities and complexities. This is an achievement that makes Che Guevara essential for anyone seriously interested in Guevara or the Cuban revolution. The Nation

Thirty years after his death, Che Guevara: A Revolutionary Life gives an admirably balanced account of the Argentine adventurer, his real achievements and glamorous Robin Hood appeal . . . . An excellent guide to the myth behind the martyr.
The Independent (London)

Exhaustive and convincing. The New York Review of Books

The best [biography of Guevara] is Andersons epic. . . . A book that puts the evolution back in revolution, a meticulous record of this extraordinary life.
Newsday

It is Andersons careful research that will define Guevara for the future.
The Denver Post

A thorough and unbiased biography of a little-understood man, dead 30 years, who remains a father figure to modern-day revolutionaries around the world . . . A book that sees the forest for the trees, and in a life as complicated and significant as Che Guevaras, that was no small task. The Oregonian

Detailed . . . the book tells as much as is likely to be known about Guevaras end....As Mr. Anderson tells it, Che lives. The Economist

The merit of Andersons work lies not only in the richness of details, but also in its objectivity. . . . Andersons book recounts in minute detail the chronology of an obsession. Latin Trade

A sweeping biography of the Latino revolutionary and pop-culture hero. Anderson . . . steers clear of ideology, arguing that the Argentine-born Guevara was both a brilliant tactician and fighter and the truest representative of the old international communist agitator the State Department warned us about. . . . Students of Ches life and deeds need look no farther than Andersons volume. Kirkus Reviews

Jon Lee Anderson has rediscovered the historical Guevara, and his authoritative biography goes far in obliterating all the sentimental dross that has accrued around the figure of the heroic guerilla. The New York Press

You would do well to read Jon Lee Andersons monumental biography, Che Guevara: A Revolutionary Life....The books mere table of contents could serve as the syllabus for Che l0l. The Washington Post Book World

[Anderson] has researched diligently and has had access to much unpublished documentation....This biography isabsorbing and convincing because of its wealth of new information and willingness to let Guevara himself speak, in quotations from unpublished letters and diaries. . . . An indispensable work of contemporary history.
The Guardian (London)

Five years of research and unprecedented access to friends, family and unpublished archives have allowed Anderson to fulfil his stated aim, to present the truth about Che Guevara. Literary Review

A massive, painstaking biography of the Argentine guerilla leader who devoted his life to the ideal of a unified Latin American revolution.
Buzz

A revealing portrait of the many Ches: the quixotic, freewheeling youth rambling around South and Central America in search of the good fight; the willful, asthmatic Jacobin of the Cuban Revolution; and finally...the holy martyr of armed rebellion at age 39. . . Che lives on as a paradox of his own time and ours.
Time Out New York

Che Guevara by Jon Lee Anderson may still be the best [biography of Che] for its deft stvle and its details of Ches post-Cuba adventures. It is also the only one to carry interviews with Ches widow, Aleida.
Pub1ishers Weekly

His biography appears to be definitive . . . . Obviously a reporter of great energy and enterprise, he scored at least two major scoops in his research: obtaining Ches uncensored diary of the guerrilla war in Cuba and discovering more or less where Ches body was buried in Bolivia . . . genuinely gripping.
Harpers

[Anderson] manages to reflect his subjects special gleam, the mix of qualities that made the Argentine-born adventurer irresistible to those of his contemporaries bent upon the violent overthrow of governments, and a durable icon for succeeding generations of revolutionaries. Che Guevara is the best treatment of its subject to date . . . . because the patient reader can distill from it a vivid sense of Che the man.
The Philadelphia Inquirer

Neither Castaeda nor Taibo has written the definitive biography of Guevara. If anyone has, it is Jon Lee Anderson, whose Che Guevara: A Revolutionary Life appeared earlier this year. The Boston Book Review