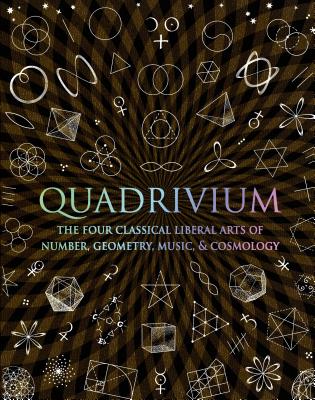 The quadrivium-the classical curriculum-comprises the four liberal arts of number, geometry, music, and cosmology. It was studied from antiquity to the Renaissance as a way of glimpsing the nature of reality. Geometry is number in space; music is number in time; and cosmology expresses number in space and time. Number, music, and geometry are metaphysical truths: life across the universe investigates them; they foreshadow the physical sciences.

Quadrivium is the first volume to bring together these four subjects in many hundreds of years. Composed of six successful titles in the Wooden Books series-Sacred Geometry, Sacred Number, Harmonograph, The Elements of Music, Platonic & Archimedean Solids, and A Little Book of Coincidence-it makes ancient wisdom and its astonishing interconnectedness accessible to us today.

Beautifully produced in six different colors of ink, Quadrivium will appeal to anyone interested in mathematics, music, astronomy, and how the universe works.

Wooden Books was founded in 1999 by designer John Martineau near Hay-on-Wye. The aim was to produce a beautiful series of recycled books based on the classical philosophies, arts and sciences. Using the Beatrix Potter formula of text facing picture pages, and old-styles fonts, along with hand-drawn illustrations and 19th century engravings, the books are designed not to date. Small but stuffed with information. Eco friendly and educational. Big ideas in a tiny space. There are over 1,000,000 Wooden Books now in print worldwide and growing.