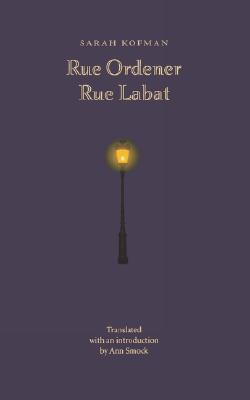 
Available in Warehouse. Wait for Email Confirmation for ETA
This book cannot be returned, cancelled, or exchanged. Please call for availability and pricing
Rue Ordener, Rue Labat is a moving memoir by the distinguished French philosopher Sarah Kofman. It opens with the horrifying moment in July 1942 when the author’s father, the rabbi of a small synagogue, was dragged by police from the family home on Rue Ordener in Paris, then transported to Auschwitz—“the place,” writes Kofman, “where no eternal rest would or could ever be granted.” It ends in the mid-1950s, when Kofman enrolled at the Sorbonne.

The book is as eloquent as it is forthright. Kofman recalls her father and family in the years before the war, then turns to the terrors and confusions of her own childhood in Paris during the German occupation. Not long after her father’s disappearance, Kofman and her mother took refuge in the apartment of a Christian woman on Rue Labat, where they remained until the Liberation. This bold woman, whom Kofman called Mémé, undoubtedly saved the young girl and her mother from the death camps. But Kofman’s close attachment to Mémé also resulted in a rupture between mother and child that was never to be fully healed.

This slender volume is distinguished by the author’s clear prose, the carefully recounted horrors of her childhood, and the uncommon poise that came to her only with the passage of many years.

Rue Ordener, Rue Labat was first published in France in 1994. Sarah Kofman, best known as a philosopher and theoretician, died that same year. Ann Smock is an associate professor of French at the University of California, Berkeley. She is the author of Double Dealing (Nebraska 1986) and the translator of Blanchot’s The Writing of the Disaster (Nebraska 1986).