The Wife of Martin Guerre (Paperback) 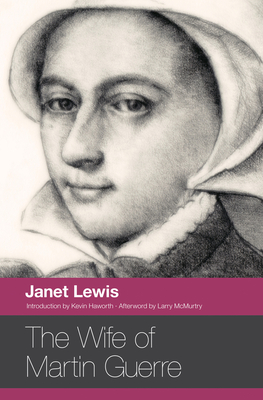 The Wife of Martin Guerre (Paperback)

In this new edition of Janet Lewis’s classic short novel, The Wife of Martin Guerre, Swallow Press executive editor Kevin Haworth writes that Lewis’s story is “a short novel of astonishing depth and resonance, a sharply drawn historical tale that asks contemporary questions about identity and belonging, about men and women, and about an individual’s capacity to act within an inflexible system.” Originally published in 1941, The Wife of Martin Guerre has earned the respect and admiration of critics and readers for over sixty years.

Based on a notorious trial in sixteenth-century France, this story of Bertrande de Rols is the first of three novels making up Lewis’s Cases of Circumstantial Evidence suite (the other two are The Trial of Sören Qvist and The Ghost of Monsieur Scarron).

Swallow Press is delighted and honored to offer readers beautiful new editions of all three Cases of Circumstantial Evidence novels, each featuring a new introduction by Kevin Haworth.

Janet Lewis was a novelist, poet, and short-story writer whose literary career spanned almost the entire twentieth century. The New York Times has praised her novels as “some of the 20th century’s most vividly imagined and finely wrought literature.” Born and educated in Chicago, she lived in California for most of her adult life and taught at both Stanford University and the University of California at Berkeley. Her works include The Wife of Martin Guerre (1941), The Trial of Sören Qvist (1947), The Ghost of Monsieur Scarron (1959), Good-Bye, Son and Other Stories (1946), and Poems Old and New (1982).

“One of the most significant short novels in English.”—Atlantic Monthly

“Lewis wrote her vibrant novella in 1941 as the first in her Cases of Circumstantial Evidence trilogy, which Swallow Press has brought back into print. The mystery here is not Martin’s identity, but why Janet Lewis remains obscure.”—NewPages

“Flaubertian in the elegance of its form and the gravity of its style.”—The New Yorker

“One of (the short novel’s) most perfect examples is Janet Lewis’s The Wife of Martin Guerre.”—Michael Dirda, The Washington Post

“Janet Lewis brings the haunting qualities of fable to this novella, based on a legal case that attracted wide attention in 16th-century France and has continued to fascinate down through the years.”

“One of the most significant short novels in English.”