The Instant of My Death /Demeure: Fiction and Testimony (Meridian: Crossing Aesthetics) (Paperback) 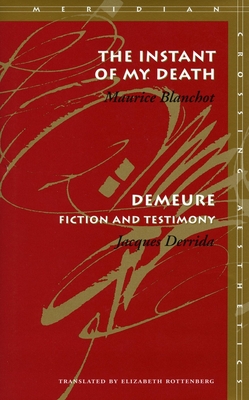 The Instant of My Death /Demeure: Fiction and Testimony (Meridian: Crossing Aesthetics) (Paperback)

This volume records a remarkable encounter in critical and philosophical thinking: a meeting of two of the great pioneers in contemporary thought, Maurice Blanchot and Jacques Derrida, who are also bound together by friendship and a complex relation to their own pasts. More than a literary text with critical commentary, it constitutes an event of central significance for contemporary philosophical, literary, and political concerns.

The book consists of The Instant of My Death, a powerful short prose piece by Blanchot, and an extended essay by Derrida that reads it in the context of questions of literature and of bearing witness. Blanchot's narrative concerns a moment when a young man is brought before a firing squad during World War II and then suddenly finds himself released from his near death. The incident, written in the third person, is suggestively autobiographical--from the title, several remarks in the text, and a letter Blanchot wrote about a similar incident in his own life--but only insofar as it raises questions for Blanchot about what such an experience might mean. The accident of near death becomes, in the instant the man is released, the accident of a life he no longer possesses. The text raises the question of what it means to write about a (non)experience one cannot claim as one's own, and as such is a text of testimony or witness.

Derrida's reading of Blanchot links the problem of testimony to the problem of the secret and to the notion of the instant. It thereby provides the elements of a more expansive reassessment of literature, testimony, and truth. In addressing the complex relation between writing and history, Derrida also implicitly reflects on questions concerning the relation between European intellectuals and World War II.

“This is a very useful book because it makes Blanchot’s powerful text widely available in both French and English.”—The European Legacy